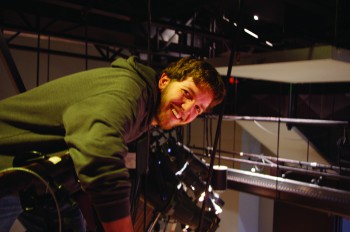 When senior Matt Lehman began his theater internship last fall, he had high hopes. Taking a break from working with the Goshen College theater department this semester, Lehman frequently commutes a few blocks from campus to New World Arts in downtown Goshen.

Lehman has spent the last few months fulfilling the 120-hour internship requirement that is required to graduate with a theater major.  Thus far, joining the crew at New World Arts, a community theater company, has proved to be a valuable experience.

Although New World is local, Lehman’s time there has opened his eyes to an entirely different way of approaching theatrical production. “Working in community theater is completely different from college theater,” Lehman said.

At this point in Lehman’s life, he does not foresee pursuing a career in theater, but has found his time at New World both challenging and invigorating nonetheless.  He has been exposed to a new group of people as well as had the chance to think innovatively about design and production on a more limited budget and a smaller scale than he is accustomed to with college theater.

Lehman is currently assisting with his second show at New World, doing everything from set design to directing. For this show, however, his main focus is light design and operation.  The show is H.G. Wells’ “War of the Worlds,” and Lehman is particularly excited about a certain aspect of this production.

“The show is going to be done as a radio program, so it will be broadcast on 91.1 The Globe after performances with a live audience.  It will have a sound effects table and other aspects similar to ‘A Prairie Home Companion,’” Lehman said.  The show will open this Friday at 8:00 p.m. at New World Arts. “It’s a really good show, and I hear that the light op is really sexy,” he added.