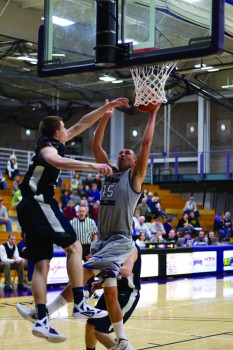 After a tough road loss this past Saturday to #22 Spring Arbor, head coach Gary Chupp and the Goshen College Maple Leafs (15-6, 5-4) made some changes before their Tuesday night contest against Mount Vernon Nazarene.

“We talked a lot after the Spring Arbor game on Saturday; offensively we got to play faster. I think we’re better when we play faster,” said Chupp following the 77-62 win Tuesday night.

By playing faster the Leafs were able to settle into their normal offense, converting 50 percent (26-52) from the floor and scoring 29 points off of 21 Mount Vernon turnovers.

Goshen led by 15 at the half, but Mount Vernon’s third-year head coach Matt Moore made some adjustments as his team went on a 10-2 run to open up the second half of play.

“Matt [Moore] made a nice adjustment at halftime; we were switching all screens, which I thought was really effective in the first half,” said Chupp. “In the second half, they took advantage of the mismatch and got Casey [Pratt] in the post and our rotations weren’t there. So, after a little while we just went back to our normal rules defensively.”

The lead was trimmed to four with a little under 11 minutes to play before Kyle Davis, a junior guard, took over the game. Davis scored six points in three consecutive possessions to give the Leafs a 62-51 lead and the momentum they needed to seal a victory.

Chupp was very pleased with the way his junior guard came off the bench and played on both sides of the court. “I thought KD [Davis] played really well tonight, especially on the defensive end,” said Chupp.

Eight other players accompanied Davis in the scoring column including Mathew Martin and Geoffry Gilot, both juniors, with 14 a piece, and Kody Chandler, a freshman, who added 11.

The Leafs are on the road again this Saturday as they travel to Upland, Ind. to take on legendary head coach Paul Patterson, the winningest collegiate coach in Indiana, and his Taylor Trojans (14-7, 3-6). Tip-off will be at 3:00 p.m. live from Don Odle Arena on 91.1 The Globe.