Breaking My Own Defenses 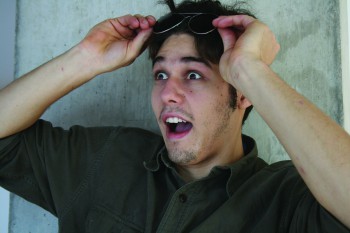 Cambodian traffic etiquette is as follows: the bigger you are, the more right-of-way you
have. This was important to consider when riding a rusty bicycle on gravel roads with gigantic
trucks blazing by inches from your shoulder. When I left for Cambodia on SST, I never thought I would have so many obvious brushes with death. I did, however, learn how to cope with them: sunglasses.
Whether you’re riding on the back of a motorbike doing 50 on a rice-field path as narrow
as the tire or riding in a 15-passenger van with 24 passengers and a texting driver, sporting some
shades makes you feel invulnerable. It might come from the fact that there is glass between you
and the world, making the world seem like a TV show. Or perhaps it’s that all the movie
heroes wear sunglasses; their coolness is on the same scale as their invincibility.
Whenever I felt uncomfortable, I donned my slightly bent, silver-rimmed aviators
and felt like a million dollars. I bought the glasses in a Wisconsin gas station for seven bucks
back in high school; I hoped I would look cool for Stephanie, my crush at the time. In Cambodia,
these shades came in handy for many other situations: bartering for duck eggs, dancing on the
waterfront and refusing beer for breakfast.
After a few weeks in Cambodia though, I realized that I relied on sunglasses to do most
things. I didn’t want to take them off and risk being looked in the eyes. I was safely cut-off from
the vibrant world I was supposed to be engaging.
For the latter part of my trip, I worked with a service organization in Prey Veng Province,
the poorest province of Cambodia. One of the motorbike drivers who worked there, Soppeat,
invited a fellow student and me over for dinner. He was a gentle old man with a mole on his face
and a laugh like a child. We accepted immediately. I didn’t take my sunglasses.
In the fading daylight, we sat on bamboo mats underneath his stilted house. I watched,
with vulnerable eyes, while Soppeat killed one of his few chickens to make soup for us. I
listened as Soppeat spoke in broken English about how lucky we are for having an education. I
spoke slow English with his son, who is learning in hopes of being a doctor in Vietnam. I tasted
fresh chicken soup, made by a man who has nothing to hide.
I believe in taking off your sunglasses. While they make you feel safe, they shield you
from experiences that require your full engagement. The next week, when I rode the 40 miles
back to the city on a sputtering motorbike, I wore a scarf on my neck, sandals on my feet, but no
sunglasses over my eyes. I let the warm winds brush my face and the green fields bless my sight.