Still winning, across the state line 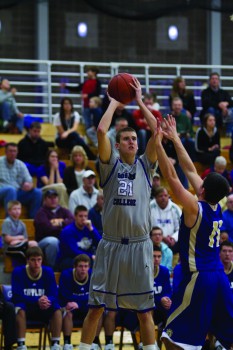 Among the leading scorers for the men’s basketball team this year include first-year Kody Chandler (21.7 points per game), and junior Garner Small (11.3). Small is also the team’s leading rebounder, with 8.3 rebounds per game. Second on that list is another junior, Mike Betcher (7.0).

Aside from their success this season, the three players have something else in common: they are all from Schoolcraft, a small town in southwest Michigan.

The three players represent one of only two cases in the Mid-Central College Conference where three high school teammates play for the same college team. As it happens, Betcher, Chandler and Small are the only three players in the conference to cross state lines in doing so.

In 2009, with all three men playing for the Schoolcraft Eagles, the team won its first district championship since the 1980s. Schoolcraft, coached by Small’s father, Randy, finished a 25-3 season with a run to the Class C state championship game, where the Eagles lost 73-67 to a team that later forfeited the title because of an ineligible player.

Following that season, Betcher and Small continued their careers at Kalamazoo Valley Community College, where both were named to Michigan Community College Athletic Association All-State teams.

Kalamazoo Valley had winning records during the two seasons that Small and Betcher played there: the Cougars finished 18-12 in 2009-2010, and the next year went 24-10 and picked up the school’s first National Junior College Athletic Association national tournament bid.

Meanwhile, back at Schoolcraft, Chandler led the Eagles to a 19-1 regular season record in 2009-2010 before bowing out in the first round of district play. In 2011, Schoolcraft won the state championship with a 27-0 record.

In the three-season stretch from 2008 to 2011, Schoolcraft won 71 games while losing just four. After a two-game losing streak in January 2009, the Eagles were 65-2 in the remaining two-plus seasons, ending with a winning percentage of .970.

Betcher, Chandler and small signed in December 2010 to join three other Michigan players on Goshen’s roster: Casey Pratt of Kalamazoo, Kyle Davis of Portage and Nate Manning of Middleville.

The Goshen head coach, Gary Chupp, said, “It can be a challenge to recruit guys from the same high school because typically you want one of the guys a little bit more. We told them early on that we obviously wanted all three of them, but we also wanted each guy independently of the other two.”

The Schoolcraft head coach, Randy Small, alluded to the trio’s high school success at that press conference in 2010, saying, “When they started to click, it was really exciting to watch.”

When he was signed, Betcher reflected on how the presence of Small and Chandler gave him an offensive advantage. Betcher explained, “I like to kick the ball out of the post a lot, and when you’ve got two good shooters like Kody and Garner, that just helps. It takes the pressure off of me in the post since I can rely on those two guys making the shot.”

Small, who stands 6’7” in spite of his surname, believes that team cohesion is a more important element than any player’s individual ability. “Our biggest strength,” he said, “is that we don’t care who scores. We’re just trying to be the best team we can be.”

Asked why the three men chose Goshen, located across a state line about an hour away from Schoolcraft, Chandler said that the chance to reunite the core of Schoolcraft’s talented team played a major part in his choice of Goshen. “I didn’t know we would get the chance to play together again,” he told Chupp, “but when you told me that you were recruiting Garner and Betcher, that put me over the edge.”

Once they get the ball, the roles of the Schoolcraft three are distinct: Chandler shoots from long range, Betcher posts up under the basket and Small creates mismatches against defenders small and large alike.