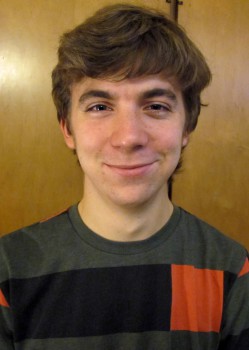 As a senior with over 112 credits, I have the privilege of living off-campus. After two years in the dorms and a semester in Howell House, I now live in a small basement apartment with a roommate and rent from my aunt and uncle who live upstairs. This arrangement is exceptionally affordable, but though I’ve settled in, the coming seasonal transition is forcing me to adjust my habits even further, spoiled as I have been on campus by amenities such as furniture and adequate light fixtures.
Without a meal plan or munch money, I subsist on a diet that is likely insufficient by most standards of nutrition. I usually make a big pot of something, often heavily reliant on rice and hot sauce, and then heat up bowls of it in the microwave until I run out a few days later. This starch and capsaicin diet, often augmented with Kroger-brand boxed macaroni and cheese is offset by a regular regimen of biking the one block from my apartment to school at least four times a day. The fact that our small apartment is desk-free encourages my presence on campus, particularly in the library or the connector. I’ve found that doing course work on the couch at home usually results in the horror of night-naps. With the onset of snow, I anticipate a lot more trudging back and forth rather than biking, but with the end of semester workload I can perhaps see a rise in my rate of calorie burn.
Speaking of winter, while I know we’re all eagerly awaiting the lingering effects of reduced sunlight and Seasonal Affective Disorder (SAD), my roommate Lucas and I are already feeling the reduced energy associated with what I call Basement Affective Disorder. We often wake to a dark apartment only to climb the stairs and find that the sun is (by Goshen early winter standards) high in the sky.
As the daylight gets shorter and the wind blows colder, I plan to stockpile root vegetables and winter squash to supplement my rice and Taco Bell Fire Sauce. I will pull out my boots and practice the five-minute walk. And, most importantly, I’ll regularly bathe in the artificial glow of the fluorescent
lights in the Harold and Wilma Good Library, taking advantage of the second floor vistas and the plethora of horizontal surfaces aching for a laptop.
–By Ted Maust, 2012, history & English major