Global Citizen of the Week: Kat and Liz Berg, Canada 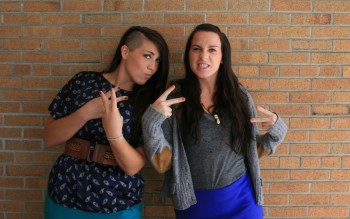 Kat and Liz Berg were born and raised in Langley, a town 35 minutes outside of Vancouver, Canada. Kat is a junior softball player pursuing a career in nursing. Liz is a senior softball and soccer player, also studying nursing.

In Canada, Kat and Liz live with their parents, two brothers and two foster siblings. Their household has been a temporary home for more than 10 foster children throughout the years.

Kat and Liz had a a lot of exposure to the American culture before coming to Goshen College. Their family usually did their grocery shopping in Washington state, which is 47 blocks away from their house, because groceries in Canada are very expensive.

· The capital of Canada is Ottawa

· A round-trip flight from Chicago to Ottawa costs about $550

Q: What is considered one of the most significant customs or celebrations in Canada?

Kat: I have to say it’s hockey. People get off work early because of hockey games. A lot of the time people go to pubs to watch a hockey game. During game days, everyone is wearing their team’s jersey. Our team, Vancouver Canucks, never wins but we still love them. One time, when the Vancouver Canucks lost the Stanley Cup, people rioted on the streets of Vancouver. The government shut down all the streets downtown, and government offices closed early. After the game, people flipped cars over and set them on fire, and the riot police had to go out on their horses. The next day there were around 15,000 people that volunteered to clean up the city.

Q: What is your favorite food and drink from Canada?

Kat: Our family eats a lot of ethnic food. There are a lot of Asian immigrants close by our city. Because of that, a lot of our food is inspired by Asian cuisine. For example, we eat a lot of Thai food, sushi, and curry. I would really like to eat some Pad Thai right now.

Liz: Salmon is my favorite food. My dad gets it straight from the First Nations people and they fish it right out of the rivers. It’s some of the best salmon in the world. People from everywhere come to buy it. Also, my dad makes crepes (which are thin pancakes) from a family recipe passed along many generations. We always put Canadian-made syrup on top or eat them with fruit. We drink a lot of coffee throughout the day as well.

Q: What are some of the most popular places to visit?

Liz: That would probably be Whistler. It’s a big ski resort—the best skiing location in the world. You can see the ocean from the huge mountains. People come from all over, mostly from New Zealand, Australia and Germany.

Q: What would your typical day look like in Canada?

Kat: We don’t have typical days. Our family does foster care, so it usually involves feeding the babies and getting our brothers ready for school. On the days my mom takes care of them, I go to the beach with my best friend. We also have family barbecues once a month and every year we go camping on Shuswap Lake, a couple of hours from Langley.