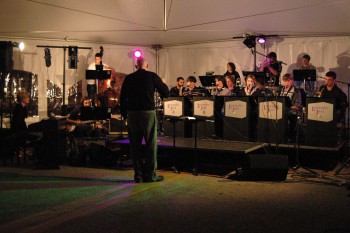 With the beginning of a new month comes another First Fridays in downtown Goshen, and Goshen College’s Lavender Jazz group will provide music.

“There will be a lot of festivities going on,” said DaVonne Harris, director of student activities. “It will definitely be worth coming down for.”
Lavender Jazz will play two sets Friday evening. The first runs from 6:30 to 7:15 p.m. and the second from 8:00 to 9:30 p.m.

During the break, Mark and Krista Daniels, both Goshen alumni, will give swing-dancing lessons. When Lavender Jazz comes back on for their second set, they will focus more on swing music so that people can practice their newly acquired dancing skills.

“It is great for us to be part of such a wonderful Goshen tradition and share our music with whomever happens to walk past Washington Street,” said Chris Fashun, director of Lavender Jazz.

Lavender Jazz currently consists of 10 students, but the size of the group varies from year to year and is open by audition to music majors and non-music majors alike. In addition to jazz and swing, the ensemble also plays blues, Latin, be-bop, funk and fusion. They give two concerts in Sauder Hall every academic year, as well as a variety of other on- and off-campus performances.

According to Fashun, each of the creative and talented members of Lavender Jazz contributes something different to the group.

“Jazz is fascinating that way,” he said, “because in a jazz ensemble, there are things that need to be played together and sound the same, while there is a significant element where each individual of the group expresses their own voice and creativity.”