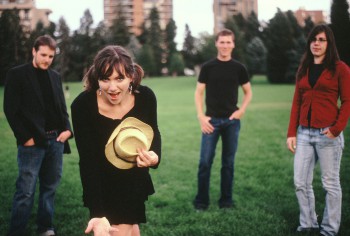 Rachel started playing music when she was 10 years old. She learned to play folk guitar in high school, and started playing at coffee shops and local events. Throughout college she played at various events with students and people in the community.

“Until this band though, I was mostly playing covers, everything from classic rock to trip hop to blues to indie rock, and not playing consistently with any of the people I played with sometimes,” she said.

Rachel Eisenstat & Iron City started to come together as a band when she began to play with her brother Dan during her freshman year. “Dan had been playing with Oedipus Funk and Elephants for Sale (other GC student bands) before I started college,” says Rachel. “We started writing acoustic folk-rock songs together and integrating them into sets of mostly covers for Kick-Offs and Hour Afters.”

This summer, Dan and his wife Sondra were asked to play a rock set for a wedding reception, and they needed a singer.  Rachel collaborated, and they spent a month of intensive practice preparing. “It went so well that the three of them approached me about playing together as a band.  My CD came out that same month, and I needed a band to help me promote it, so the timing was perfect.”

Rachel explains that the band is inspired by soulful, emotive music with an intellectual drive. She describes her vocals as soulful and expressive while she describes Dan’s sound as a guitar experimentation with a math rock background. “Music that is experimental often doesn’t move people the way that standard ballads do, and can even come off as aloof or elitist. Why? Can’t it be intellectually interesting and connect with the audience on a gut level at once?” she said.

The debut album “Iron City” is a five-song EP that was released as her solo record, but “was really a community effort” she says. Everything from the additional instruments to the recording production and album cover graphic design were done by friends for free.

“I think it’s indicative of the direction that much of the music industry is headed actually, musicians are putting their material out there completely independent of major record labels, promoters, and with the help of their friends and community, which is what music is really about, after all,” said Rachel.