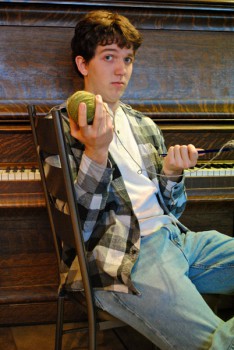 By Matt Lehman, a Bible and religion major with a theatre minor from Kidron, Ohio.

I knit. Some guys work on cars, play sports or play video games. But I knit.

I started knitting because I was bored. A yarn store down the road from my high school offered a free skein of yarn and needles to anyone who signed up for classes, so I thought I would try it out. The next thing I knew, I was spending two hours every Monday night learning how to knit and making post-menopausal friends. The weirdest part, though, was that I enjoyed knitting. I loved taking a ball of yarn and turning it into a scarf.

My friends thought I was crazy. I was bold enough to knit in public and my friends were less than supportive. Most thought it was abnormal, and a few wondered how soon I’d be coming out of the closet. But I just liked knitting.

Besides providing me with a way to stay warm in the winter, knitting began to teach me a few things. The most important thing, though, was that sometimes what you want to do is different than what people expect you to do. And that’s okay. Eventually, I decided that I didn’t care what people thought.

When I got to college, guys that knitted were suddenly cool. I joined the Hesston College knitting club, and now the Goshen knitting club meets in Howell House every Wednesday at 10 p.m. (shameless plug).