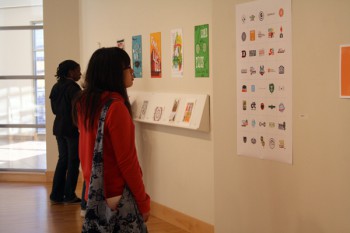 Do you ever wonder where your favorite bands’ posters come from? They might have been created by Mikey Burton.

Burton, a graphic designer from Canton, Ohio, will have his artwork displayed in the Hershberger Art Gallery at Goshen College until Jan. 12. He addressed students in a Topics and Issues session on Sunday following his reception.

Burton earned his Bachelor of Science and Master of Arts degree in visual communication design from Kent State University in Ohio.

“I always liked drawing,” Burton said.  He describes his design aesthetic as “Midwesterny” and draws much of his inspiration from artifacts found throughout ancient textbooks and garage sales.

However, education “was very difficult at times,” Burton said.  He received a C on his first graphic design assignment in his master’s program.  “I worked very hard on it and I wanted to quit,” he said.  Yet, he pulled through, enjoyed the remaining time in the program, eventually starting his own company.

Along with two friends, Burton established the business “Little Jacket.” They created posters for numerous bands.  The first poster was a blue skull with a black background.  Following were other posters and stamps for bands and singers.

Little Jacket continued to create posters for small bands until they were discovered and made their first poster for a large corporation.  In 2005, Little Jacket began a partnership with CMJ Music Marathon & Film Festival.  CMJ is acknowledged to be one of the world’s most important platforms for the discovery of new music.  Little Jacket designed several posters for CMJ. “I thought this was a really good accomplishment,” Burton said.

Little Jacket grew as a business and established partnerships with clients from Ohio, New York, and Colorado.  While working with Little Jacket and his friends was a great opportunity, Burton also began working alone.

Burton designed logos and brands for various organizations.  “I started to do a lot more branding,” he said.  Facebook, Nike, and The Daily Heller are just a few brands out of many Burton has worked with.

More recently, Burton has worked on designing book covers.  “I wanted to get into book cover designs.  So I went and picked a few different titles,” he said.  Burton chose famous books such as “Lord of the Flies” by William Golding and “To Kill a Mockingbird” by Harper Lee and redesigned book covers which can be purchased on his website.

Burton greatly enjoys what he is doing.  He encourages people to “take on any opportunity and be passionate with what you do in life.”  Through his passion he received awards from Communication Arts and other publications.

He now lives in Philadelphia where he enjoys working for 160 over 90, a branding agency, while retaining his role as a partner at Little Jacket.