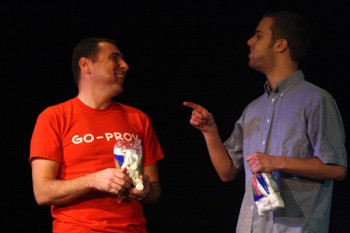 GoProv is an improv group that was formed a few years ago as an off-shoot of a comedy performed at the New World Arts theater in downtown Goshen. The troupe’s show “Improv Battle Royale with Cheese” has been on the stage at New World Arts (NWA) for the past two years and is performed at every other First Friday event. During the off-months when they are not performing at NWA, GoProv travels around the country to perform in public venues as well as private events. The troupe also presents occasional workshops for children.

“During the off months, the players still want to do improv. I formed GoProv as improv comedy on the go to satisfy our desire to perform,” explained the group’s director, Steve Freeto.

Freeto added that he really enjoys the “art” of improv comedy. “Performing is a fantastic part of improv, but I mostly enjoying developing an ensemble and seeing the growth in individuals and the group,” Freeto said.

As in any improv routine, audience participation was central to the success of Saturday night’s show. Some of the highlights of the evening included a dolphin impression by junior Matt Lehman and a marshmallow mouth-stuffing sketch featuring Nathan Geiser, a sophomore. The show also featured an abundance of puns, games, songs and gibberish.

In keeping with the comical theme of the event, the CAC served “wine” and cheese and decorated the room in the style of a comedy club, complete with a fog machine.