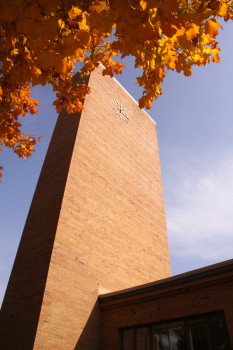 A familiar ringing mysteriously vanished from Goshen College this fall. The clock tower over the Union Building was silent. The strangest part was that nobody seemed to know when or why it disappeared. In the weeks leading up to the mysterious silencing, the chimes had a tendency to stop mid-ring or ring incessantly. It was a mystery.

As it turned out, the bells hadn’t been stolen, abducted by aliens or silenced by students protesting their class schedule. They had been shut down by Utilities Manager Glenn Gilbert.

“It’s been off since last Friday and nobody notices” Gilbert said last week. He explained that the amplifier for the bells was wearing out and it had started to annoy him. He turned it off because “people don’t notice it when it isn’t there. But if it’s off by two minutes I get a call.”

The Goshen College history, “Culture for Service,” described the clock tower as under-appreciated. A majority of students on campus noticed that the tower had been malfunctioning but, as Gilbert suggested, most could not remember when the bell tower stopped ringing.

Student criticism of the chimes’ problems go back to 1959 when Donald M. Marquis wrote a humorous article for The Record complaining about the erratic sounds coming from the bell tower. “It either didn’t ring, rang all the time, or rang a pseudo Jazz pattern that exemplified the worst of Benny Goodman, Louis Armstrong, and Caesar Frank,” said Marquis.

Goshen College installed chimes as part of the construction of the union building in 1956. The system was an electrical mechanical device made up of small hammers that struck four metal bars. The sound was amplified like it is today but, according to Gilbert, “was very problematic.” So 16 years ago the graduating class of 1994 combined with the class of 1944 to replace the mechanical chimes with a digital system. A recording of the Indiana University chimes plays through the speakers on top of the union building. The recording and the speakers work fine, but the amplifier has deteriorated over the years. “It started two winters ago. It would cut out when it got really cold.” said Gilbert.

The amplifier, however, is an easy fix. Gilbert borrowed a spare from ITS media for homecoming weekend while he waited for the $200 replacement that he ordered from eBay to arrive. The cost of replacing the whole system again ranged upwards of $9,000, and investment that does not fit in Gilbert’s budget this year.

Most mysteries end when the detective calls everyone into the same room and points out the culprit. This mystery didn’t really have a villain, but it does have a happy ending. And maybe, just maybe, people will learn to take notice of the bells when they toll.