Maple Leafs walk off with double header split against SHU 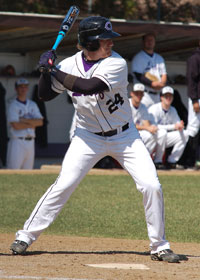 GOSHEN, Ind. – With a much different atmosphere than a typical Tuesday afternoon non-conference double header, the Goshen College baseball team managed to come from behind and take the finale in extra innings as they earned a double header split with visiting Siena Heights University.

With media swarming around the Maple Leafs pre-game preparations and an anticipatory crowd gathering, it felt more like postseason action than a final tuneup for Mid-Central College Conference action beginning later in the week.  Over 100 were on hand to witness the first-ever playing of the national anthem at a Goshen sporting event and the double header proved to be a perfect backdrop for the event.

Unfortunately, the energy of the historic day did not translate into immediate results for a young Maple Leaf squad.  Goshen committed three errors in the first two innings as the visitors were able to capitalize for a big 6-0 early advantage.

To the pleasure of the large crowd, the Leaf bats came alive in the bottom of the second.  Sophomore Garrett Cannizzo and senior Kraig Miller started the inning with back-to-back doubles and Miller was promptly brought home with a Josh Yates single.  Goshen eventually struck for four runs in the frame to cut the deficit to 6-4.

Siena Heights answered immediately, though, and scored four more times in the third.  Goshen was able to strike back for one in the bottom of the third, but did not put much else together until the sixth.  Meanwhile, senior Caleb Kitchell came out of the bullpen and shut the Saints down.  He did not allow a hit and struck out four over his 3 2/3 innings of work.

In the sixth, an RBI double by senior Sean Sears and a run scoring single by Kraig Miller chipped two runs off the board.  Despite out hitting Siena Heights 13-11 overall, the Leafs could not claw all the way back as they dropped the opener 10-7.  Senior’s Josh Yates and Sean Sears each had three hits to lead Goshen.

The nightcap was a much different ballgame.  The Saints did get the contest’s first tally, but strong pitching on both sides early led to a 1-1 tie heading into the fourth inning.  Both teams added a single run in the fourth as they headed into the fifth still tied at 2-2.

It was in the fifth that Siena Heights broke the game open, for the time being.  They pounded out three hits and took advantage of a wild pitch to gain a 5-2 lead.

In the bottom of the inning three straight hits by Benjamin Kelly, Zac Miller, and Corey Johnson trimmed one run of the Leafs deficit.  An inning later, a Kraig Miller double cut Siena’s lead to 5-4, but still left Goshen with one run to make up heading into the seventh.

Despite a leadoff single, the Maple Leafs hopes looked dim as a strikeout and a caught stealing left no runners on base with two outs in the seventh.  The Saints opened the door for Goshen as they committed errors on three straight plays allowing the Leafs to tie the score and send the game into extra innings.

In the extra frames, sophomore Shane Davis was dominant on the mound.  He finished the day with 4 2/3 innings of scoreless relief and eventually earned the win after shutting down the Saints in the ninth.

Still tied at 5-5 in the bottom of the ninth, Goshen put together their winning rally.  Cannizzo started the inning with a single up the middle before a Brett Hunter fielder’s choice was not able to cut him down at second.  Kraig Miller advanced Cannizzo to third with a sacrifice bunt, forcing the Saint defense to come in and try to cut the winning run down at the plate.  Sophomore Jordan Short forced the issue with a hard grounder up the middle, which Siena Heights was unable to handle resulting in the Maple Leaf walkoff 6-5 victory.

Kraig Miller finished the game 2-for-4 with three RBIs, while Kelly, Johnson, and Zac Miller all added two hits.