Speaking from Experience: The Humble Cyclist 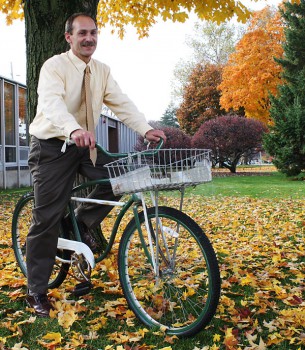 For too many years I biked in a bubble. I can tell you the year that my single-speed J.C. Higgins with a headlight and balloon tires was stolen (2007) and how much I paid the Physical Plant for a replacement bike with a metal mesh basket ($25).  I can even tell you my preferred parking spot—it’s the first slot to the left at the east entrance to Newcomer.

But I never paid any mind to other cyclists on campus – what kind of bikes they rode, whether they had trouble with theft, where they liked to park. I might as well have been the only biker at Goshen College.

Then last year the marketing gurus from Mindpower came for a visit. On the way to devising our Peace by Peace campaign, they brought their outside perspective to campus.  Goshen emerged with several distinctives: one was that we have a tendency toward spontaneous outbursts of song; another was that we have a strikingly large number of bikes on campus.

If we needed confirmation of the bike count, we got it this fall. For the first time in my nearly 10 years of teaching at Goshen, I’ve had to park my bicycle illegally – several times. Once I parked against a tree at the Recreation-Fitness Center and another time against a wall in front of the library.  I’ve arrived for class at the Ad Building and found that all the parking spaces were full in the nearby racks – and so I had to wheel my bike over to a rack near the entrance to Westlawn.

Curious about how many bikes are actually on campus this fall, I checked with Clay Shetler, director of the Physical Plant.  He said they have a rolling system, simply adding new bikes to the registry each year – without striking any from the rolls. So there’s no official, comprehensive annual count.

“We do think we need more parking,” Shetler said. “Two places we have identified for sure are the Visual Arts Building and the College Church. We get a huge amount of bikes for chapel. But how many racks do you put in when they’re used for only 45 minutes twice a week?”

Right now there’s parking for 10 at the Visual Arts Building and for 15 at the College Church. If more racks are ordered, Shetler said they’ll come from our supplier in California, whose first customer was Stanford.

Still curious about the number of bikes, I made the rounds one Sunday afternoon. The number is not official, but I counted 345 bikes, with most of them, as you’d expect, clustered around the dorms. In places, two bikes were squeezed into parking spaces intended for one. Given 639 students who live on campus, that’s one bike for every 1.85 students.

What’s more important than confirming our ranking is recognizing that we are a campus where bicycles – and people who love them – flourish. Bike people, to generalize, are friendly and welcoming. They’ll slow down. They know how to share a sidewalk.

There’s one more thing. Lisa Jordan of Mindpower said Goshen College also stood out for the kind of bicycle she found here. Unlike most campuses, where pricey bikes serve as status symbols meant to impress, here she found rows of simple bikes intended to get from point A to point B. To the roll call of compassionate peacemakers, passionate learners, global citizens and servant leaders, we might add this: humble bikers.