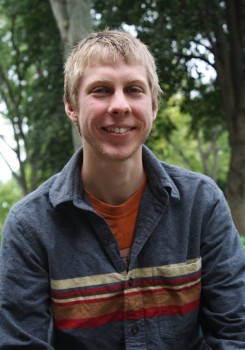 Of all the stories my father told me and my siblings around the dinner table, the most captivating ones, by far, were his tales about the time he spent at Bad School. Bad School was a place where doing homework was punished, pulling hair was rewarded, and beating each other up at recess was an event organized by teachers. My dad was a stunning straight-F student, and he worked hard to get there, because the astonishing punishment for getting an A on a test was to be shot with arrows by students that were way “badder” than you. Any sign of generosity or sharing was discouraged. In general, chaos reigned.

These stories could go on for an entire dinnertime conversation where the badness of Bad School would spiral out of control; but in the end my dad always reassured us that he was no longer bad, because afterward he went to Good School and met mom. So what is Good School? As it turns out, Good School is Goshen College.

I myself have attended many schools, both bad and good, and ultimately I too have now come to Good School, just like my father, and his father before him, and his father before him. In fact, nearly all of my aunts and uncles on my dad’s side attended Goshen along with nearly all of their children. In total, there have been over 22 members of my family, excluding second cousins, who have attended Goshen College; and this is our centennial year. In 1909, my great-grandfather John L. Yoder was the first of our clan to set foot on campus, and we haven’t stopped coming. Our current generation of Goshenites has yielded seven cousins to this college.  The two oldest of us have already graduated, and five of us are studying here right now. We still hope to draw our eighth and final cousin, Ben, who, if he comes, will have finally completed what we’re calling the “royal flush” of family attendees.

Despite the fact that our family has been dumping money on this place for the past 100 years, we, unfortunately, do not get any family discounts or free t-shirts or anything. So why do we all keep coming? Many of us have asked this question and many have nearly gone somewhere else for the sake of forging our own path. But, as you might have guessed, the path that was forged by my great-grandfather a century ago is not the same path that we have each ended up on.

We have all come to this college with expectations cultivated by our parents and grandparents, but are forced to recognize that Goshen is a different place for everyone. For me, this college is a place where I can keep in touch with my Mennonite roots, but be surrounded by people who see that tradition is not enough and demand justice, creativity, and progress. 22 of us have ended up here at Good School, and turned into 22 different people headed in new directions, pushed by our peers and professors to explore new places and ideas. These people are part of what makes Goshen College Good School, and my family can be proud to have sent so many of its children here. Something that would make Goshen College even “gooder” though, would be free T-shirts for fourth generation students. (Wink wink admissions.)

Noah Yoder is a senior art major and history minor.