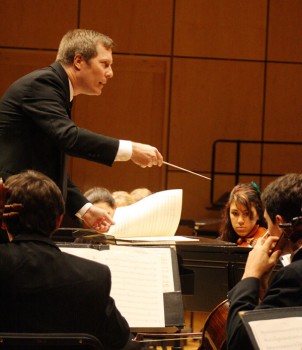 On Saturday evening, Sauder Concert Hall was stuffed to the gills with a peculiar range of students.

Though half the attendees were current Goshen students sporting torn jeans and tennis shoes, the other half consisted of former students, now alumni; some with white hair, deep in conversation with their grandchildren. Despite this range in age, however, the music performed for the Homecoming Music Gala united all students, proving that Goshen continues to be a place of musical talent and personal growth.

The Gala started with an introduction by director Debra Brubaker, inviting the audience “to our place of work and play.” Director Scott Hochstetler then opened with the College Chorale, a choir consisting of 60-70 members that sing a variety of musical genres. The second song, “Alleluia” by Randall Thompson, was a beautiful song that split the choir into seven parts; the text for the whole piece consisted of the one word, “alleluia.”

Next was the Goshen College Chamber Choir, directed by Brubaker. The choir consists of 28 singers, allowing for a smaller yet more refined sound. The second song, “Gloria” from Missa in Angustiis, featured soloists Carrie Rivera, Jenni Miller, Ben Toews, Adriel Santiago, and Christine Larson Seitz on the piano.

Next the Men’s Chorus performed, directed by Hochstetler, which was followed by the Women’s World Music Choir directed by Brubaker. The men opened with an intense song called “The Word was God,” which chanted repetitive phrases. In contrast, the women opened with a lighter song, “Kuo rongo mai koe,” in which they marched down the aisles and onto the stage as they sang.

The Goshen College Orchestra, directed by Gregg Thaller, opened next with the Overture from Nabucco, an opera by Giuseppe Verdi that follows the Jews as they are exiled from their homeland by King Nabucco, or Nebuchadnezzar. For the final song of the night, all choir members joined the stage to sing along with the orchestra, performing “There Shall a Star from Jacob Come Forth” from Christus.

As the concert ended, the participants seemed to be happy with their performance.

“I think the performance went very well–there was a lot of energy, especially in Women’s Choir. It was impressive for our first performance of the year,” said first-year Jessie Gotwals, who performed in the Women’s Choir and the College Chorale.

Returning alumni also seemed to be impressed with both the facilities and the performance. Jeff Martin, who graduated from Goshen College in 1989, returned this weekend to Indiana from Pennsylvania for the first time in five years for Homecoming. When Martin was a student at Goshen, the only facilities for performing were the Umble Center and the Union—which, in comparison to the new Sauder, he joked, “now seem awful.”

“As a formal alumnus, I was impressed by the quality, the facility, and the performance. It just blows me away,” said Martin.