Beyond the Bubble: Tillie Yoder 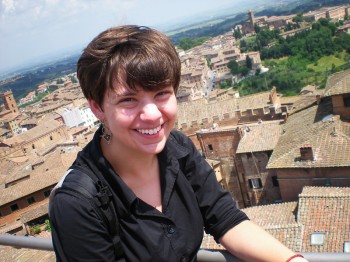 I am the product of an art-absorbed family, so when my brother and I got the chance to spend three months of this past summer traveling around Spain, Italy and France, I was naturally very excited about the prospect of seeing what Europe had to offer. After years of being dragged to museums and galleries, looking at art books for fun, and seeing my family paint, sculpt, photograph, and teach art, I’d developed the ability to identify artists or movements by looking at individual works.  I had learned a host of trivia about the lives of artists, and overall I had more enthusiasm for art than is normally found in a girl my age outside of an art department. Now I was finally going to see, with my own eyes, some of the greatest centers of western art and culture in the world: the Prado, the Uffizi, the Musée d’Orsay, and the Louvre – not to mention the myriad of wonders throughout Barcelona, Pompeii, Rome, Florence, Venice, Paris, and other cities.

Full of energy and eager to begin, Noah and I set off on our journey, certain that we’d encounter breathtaking art around every corner. After days wandering in and out of museums and through cities that were museums in and of themselves, however, the sheer amount of things to see took its toll. I went from spending a few minutes in front of each Greek or Gallo-Roman sculpture I saw, for instance, to spending about a few seconds. I was left unfazed by the hordes of gilt altarpieces, embroidered robes, and jewel-encrusted relics: there was simply too much to take in and remain sane (in fact, there are many who don’t handle the situation so well and develop Hyperkulturemia, a psychosomatic syndrome brought on by the presence of too much beautiful art – seriously). Even a brief respite in the Picasso and Chagall museums in France, (ah! secular art with a general disregard for proportion and realism!), was not enough to relieve the feeling that we were “crammed with the classical.”

When the time came to wade into the daunting waters of Paris museum land, we were ready but cautious. We found that both the Venus de Milo and the Mona Lisa were overcrowded and anticlimactic, and opted to spend more time among classical French painting, the Egyptian collection, or in Northern Renaissance areas instead.

So what should I take away from my experiences in these art-saturated places? Firstly, if a place is so full of art that absorbing all of it is impossible, it does not mean that the place is overrated. True, throughout Spain, Italy, and France there was much that did not impress me as time went on, but there are also countless times where I was awestruck by what are rightfully termed “masterpieces.” Any place in the world – from my home in the notoriously “boring” state of Ohio to ‘the City of Light’ to this campus in flat Indiana – will have both the breathtakingly beautiful as well as that which may appear mundane: all you need to do is know how to recognize the art around you.

Tillie Yoder is a sophomore History and English major from Columbus, Ohio.