New faculty art members Randy Horst, Kristi Glick, and Anne Berry have more than just teaching to offer Goshen College. The three are currently displaying their artwork in the Hershberger Art Gallery, proving that the experience they bring to their new positions is based on a background of natural talent, creativity, and skill.

Randy Horst graduated from Goshen College in 1983 with a major in art education. He received his Master of Fine Art in drawing from Bowling Green State University. He taught at Bowling Green and Goshen College before teaching art and art history for 15 years at The University of Montana Western. Beginning this year, Horst is an associate professor of art at Goshen.

Horst’s work features three main collections. The first set is a series of photography, each containing digitally-altered photos that have tiny holes punched out of them. One set, titled “Charles Spectrum #1: In search of heaven,” shows photographs of sea food from Paris street markets, and flowers from Monet’s gardens in Giverny. 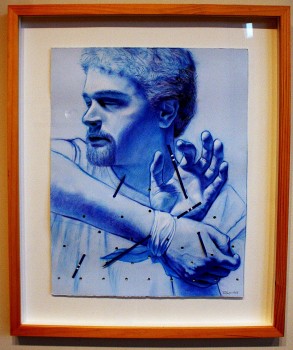 Horst’s second featured collection is a series of images of Saint Sebastian, a Christian saint martyred in the third century. Sebastian is commonly portrayed in literature as tied to a post and shot with arrows. Horst depicts his own version of Sebastian’s martyrdom by using conte and lacing bamboo sticks through the paper. The resulting image is a fascinating illusion that the man is actually pinned to a tree by arrows. A second series shows Sebastian nursed back to health before his final death.

“Paper, which is physically flat, can also be teased into looking illusionistic. An image can both be amusing and troubling,” Horst said.

Kristi Glick was born in northern Indiana into an artistic family that traveled often–a factor that established within her an early passion for art and natural beauty. Glick graduated from Goshen College in 1997 and from East Carolina University in 2007. Upon returning home from Bolivia after serving three years as a voluntary service worker, Glick discovered enamel as a medium and was inspired by its beauty and versatility. Since then she has worked as a studio artist, and now joins Goshen’s art faculty to teach Enameling, Jewelry, and Design.

Glick’s art is made of pieces of steel and enamel that she finds at junk yards. One collection, titled “Scrapyard Suns,” features pieces of enamel, found steel, and electroformed copper that have been shaped into sun-like figures. The suns look like they have been collected from a junkyard, but are simultaneously artistic, intriguing, and perfectly rugged. Another collection, titled “Wheel of the Infinite” features five enamel and steel wheels, each unique despite their similar mediums.

A piece from the series Scrapyard Suns by Kristi Glick. Photo by Julia Baker.

“The steel objects I find at the scrap yard offer cool colors and hard-edged mechanical shapes,” said Glick, “I practice my art in a way that has less harsh consequences for this earth I love.”

Anne Berry has worked as a graphic designer since graduating from Goshen College in 1999. Berry received her Master of Fine Arts Degree in 2008 from the School of Visual Communication Design at Kent State University. Her graduate work focused on environmental graphic design, a branch specializing in 3D design. Berry joins Goshen’s faculty as an assistant professor of art, teaching Graphic Design II and Design for the Theater.

Berry’s work shows the sketches and final product of her thesis project, an environmental design titled “Sense of Place,” which she created for the Mavin Foundation. The sketches and blueprints show ideas for colorful banners that line streets and walkways to advertise for the foundation.

Anne Berry created the Sense of Place banners for the Mavin Foundation as a part of her thesis. Photo by Julia Baker.