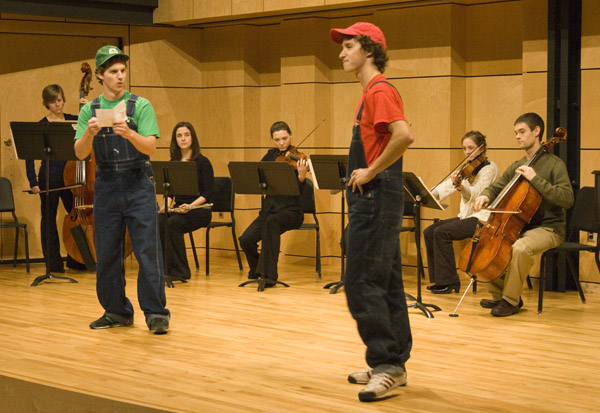 Portions of Jesse Landis Eigsti's "Operetta of 8 bit proportions" were performed at his senior recital earlier this semester. Photo by Chase Snyder.

As several senior recitals are slated to take place on the Umble Center stage and in Rieth Recital Hall over the coming days, a few students are utilizing a new performance space on campus.

Yost room in Umble Center is traditionally only a classroom, but Alison “Darcy” Brookins, a sophomore, and Phil Stoesz, a first-year, are presenting independent shows in the space next Wednesday and Thursday. Prior to these performances, Jesse Landis-Eigsti, will premiere his short opera, “I Fratelli Mario,” on the Umble Center stage.

Though he completed his senior recital and officially graduated in the fall semester, Landis-Eigsti is hard at work staging the show, based on the classic Nintendo Super Mario video game.

He wrote and composed the opera by himself. “The idea of making a Mario opera was actually first suggested by my mom,” Landis-Eigsti said. “I was saying I wanted to write a short, silly opera, and she suggested Mario. It’s perfect opera material, and I only wish I had time to write a full-length version.”

“Princesses, far away lands, a warp whistle?” Landis-Eigsti said. “It started to remind me of Mozart’s ‘The Magic Flute,’ which was the first opera I ever saw.”

Because it is an opera and performed in a three-dimensional world, Landis-Eigsti had the opportunity to expand on the video game plot.

For example, Landis-Eigsti explored the sibling rivalry between Mario and Luigi, who are on a mission to rescue Princess Toadstool from the evil Bowser. He also tried to make the Princess a more complex character than the passive figure she is in the games.

Following the opera, Brookins and Stoesz will present two Blackbox shows – a show in a small, intimate space – which they organized.

“While I love the theater space we have in the Umble Center and appreciate all the opportunities that it gives us,” Brookins said, “I really wanted to try something more experimental, intimate, off the cuff and without formality.”

After she spoke with Stoesz about the idea, the two developed Hat Tree Theater. “Hat Tree” is a rearrangement of the letters in “theater.”

Brookins and Stoesz organized a cast and crew for two plays, “The Sandlewood Box” by Mac Wellman and “dREAM tRIPPIN’” by Thomas Campbell.

Stoesz directed “The Sandlewood Box,” a story about a young girl who meets a woman who collects catastrophes. “dREAM tRIPPIN’,” directed by Ben Jacobs, a senior, tells the story of two people on a business trip who continually wake up in a dream.

Tickets can be reserved for both shows by e-mailing hattreetickets@gmail.com after 12 p.m. on Thursday. E-mails should include your name and the date you wish to attend. Tickets are free and include admission to both shows.

Hat Tree Theater encourages audience members to wear hats in celebration of the groups’ opening shows. A hat tree will be available.