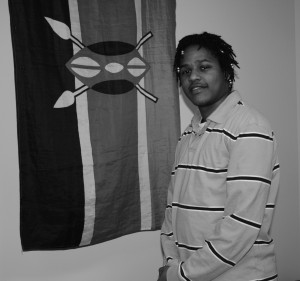 Raymond Waweru, second year Kenyan student is excited about newly inaugurated Barack Obama's Kenyan heritage, and what it means for the U.S. and Kenya. Photo by Chase Snyder.

“When Obama first obtained his Senate seat, I was in a rural area of Kenya doing fieldwork,” said Ryan Sensenig, assistant professor of biology. “My field assistants were excitedly discussing Obama’s run for the Senate seat before I knew who Obama was.”

Sensenig, who grew up in Kenya, explained that news “is part of the very fabric of Kenyan culture … The citizenry is very literate about global concerns.” In fact, the greeting “hello” in Swahili is literally translated, “What is the news?”

Afrah Haile, a sophomore from Kenya, remembers talking online in November to his brother and sister. His siblings had a two-day vacation after the election.

Raymond Mwangi Waweru, a first-year, affirmed Haile. “My Mum called. … She told me that the day after he was elected was announced as a public holiday for the whole country.”

Waweru’s family celebrated the win with their neighbors.

Sensenig said that “the declaration of a national holiday marking a U.S. political event speaks most profoundly to the Kenyan awareness of global politics and the inextricable links between East African and U.S. policies.”

Back in the U.S., Waweru was ecstatic when he heard the election results. He “knew how much it meant to Kenya that the son of a Kenyan father was going to be president of a world superpower.”

Sensenig said that family is an important facet of the Kenyan culture, so Obama’s inauguration represents “the achievement of an extended family member.”

Sylia Awino Oduor, a first-year international student, said, “The people who are really excited … are from the Luo tradition.” Obama’s grandmother was a Luo, as is Oduor, who feels “pretty thrilled” about the inauguration. She believes that Kenyans without televisions probably traveled miles to watch the ceremony, just like they did on Election Day.

Sensenig is particularly energized about the inauguration because of the potential for increased international awareness. He wonders, “Can an Obama presidency help us become global community members who are as astute as those field assistants in Kenya?”