Seniors make a scene: Prepare for busy weekend of recitals at Umble Center 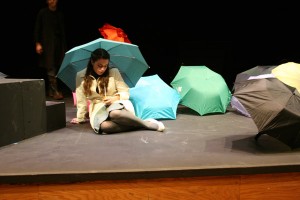 Emily Swora's Senior recital comes with a twist. Pre-show music and a stage full of umbrellas will usher the audience in. Photo by Chase Snyder.

Looking for something to do this weekend? Three theater events should be enough to keep anyone busy — and they’re all in one place.

For her senior recital, Swora will perform seven scenes from four different plays about Orpheus and Eurydice. This Greek myth has been written and rewritten in various forms over time. The night will combine many playwrights’ contrasting versions of the story. The performance uses texts by Mary Zimmerman, Sarah Ruhl, Jean Anouilh and Tennessee Williams.

According to the myth, Eurydice dies on her wedding day. Orpheus, a famous musician, travels to the underworld, Hades, to win Eurydice back. The lord of the underworld agrees to let Eurydice return on one condition: Orpheus cannot look at her until they both are back in the upper world. The two begin their journey back. At the last moment, Orpheus turns and looks at Eurydice and loses her once again.

The plays require seven actors. Swora will play all the Eurydice characters and Ben Jacobs, a senior, will play all the Orpheus characters. Other ensemble members include Tyler Yoder, a senior; Angie Noah, a junior; and Emily Bowman, Phil Stoesz and Jay Mast, all first-years. Sarah Noah, a junior, will direct. Additionally, several other students helped design and build the set.

“We’ve assembled a team of really creative and outgoing people, so rehearsals have been quite collaborative,” Swora said.

Noll’s show features only two people: Noll and Andrew Landis, a senior. Noll and Landis will perform “The Zoo Story,” a one-act play by Edward Albee. Although Noll first chose this play for its script length and cast, he has grown fond of its strong contrast between comedy and tragedy.

The entire play is a conversation between the two young men on a park bench in New York City. According to Noll, “The Zoo Story” is a dark comedy about “urban alienation and human need for emotional connection.”

“Even though this is ‘my’ senior recital, theater never succeeds on the ambitions and ideas of an individual,” said Noll. “This production would be much poorer if not for the creativity and commitment of the entire team in the collaboration process.”

The play will last 45 minutes. “It’s free, and there will be refreshments afterward, ” Noll said. “You will have plenty of time to get to Kick-Off.”

To finish off the weekend of theater on Sunday, students will perform short scenes that they used to compete in the American College Theater Festival in early January.

Tickets are not required for any of the three events.