A strong weekend for the Goshen College women’s soccer team was capped off by a Labor Day win over the West Virginia University Institute of Technology, as the Maple Leafs handed the Golden Bears a 6-0 drubbing.

With goals from six different players — a feat that has not occurred since 2012 — the Leafs took control of the game from the first minute and never relinquished it.

“We have a lot of players that are staying after training, coming before training, so I think this result speaks to them and to what they’re willing to put in outside of practice and games,” said Justin Crew, head coach of women’s soccer.

“Credit to the players for staying focused and wanting more, and keeping up the right energy.”

While the game was filled with notable moments, some of the best included a screamer from Adamczyk into the top corner just before the half, defender Tatai’s first career goal with the Maple Leafs, and Tavares’ booming goal from a free kick.

“I felt great,” Tavares said of her shot. “It was my first goal from a free kick, but really, I was just glad to score for my team.” She echoed her coach’s sentiment that “there are a lot of players that stay after practice,” and with this weekend’s results, it seems that work is paying off.

On Saturday, just two days prior, the Maple Leafs defeated the Point Park University Pioneers 2-0 in another Garcia shutout. Seja Lang, the Everence Student-Athlete of the Week, scored both Leafs goals while putting four total shots on goal. Her second goal, coming in the 81st minute, was assisted by Katie Sauder, who also had an assist in the WVU Tech match.

The men’s team also played on Saturday, drawing University of St. Francis (IL) 3-3 in a back-and-forth battle. The Leafs jumped out to an early lead with goals in the sixth and 22nd minute by Felipe Carli and Lucas Bontrager, but two Saint goals in quick succession sent the teams to the benches tied 2-2 at the halftime whistle.

John Mlondani scored 15 minutes into the half after a Carli assist, but mere seconds later, Sergio Fernandez-Arango sent a howler past Leafs keeper Matias de Fonseca to knot the score at 3-3. The game remained tied for the next 30 minutes until the full-time whistle.

The men, 0-2-2 on the season after the USF match, traveled to seventh-ranked Indiana Tech last night for a mid-week matchup. Their next game is a home match against Madonna College at 3:00 p.m. on Saturday.

Meanwhile, the Goshen women, now 3-2 on the season, travel to Madonna University for their next match on Saturday. They next play at home on Wednesday, Sept. 14, at 6:00 p.m. against Olivet College.

The men’s and women’s tennis teams started their season on Saturday, both playing a doubleheader against Huntington University and Mt. Vernon Nazarene University. The men split the matches, following up a tight loss to Huntington, 3-4, with a perfect 7-0 sweep of MVNU.

Just across the fence, the women had bright spots with Szofia Kallai and Carmen Aliaga each winning all four of their matches (including doubles) but their efforts weren’t enough to secure a result, and Goshen lost 2-5 to Huntington and 3-4 to MVNU.

Both teams played Indiana Tech on Monday, with the men falling 2-5 and the women blanked 0-7. The teams had a home doubleheader yesterday, playing Spring Arbor University and Indiana Wesleyan University.

Next on the docket is a Saturday doubleheader in Fort Wayne, where both teams will take on University of St. Francis (IN) and Bethel University.

In their final match of the weekend, Christina Towne picked up three aces, and Sadie Brenneman added 16 kills as the Leafs swept Montreat College (NC), 3-0, with a season-best hitting percentage of .275. With this victory, the Leafs’ record improved to 2-8.

The Leafs will face four non-conference teams across Friday and Saturday. 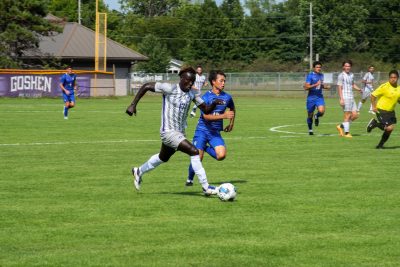 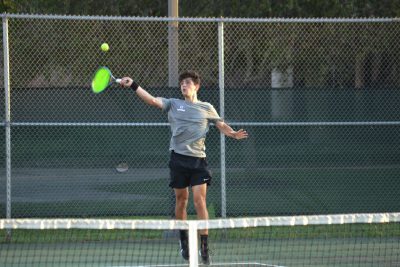 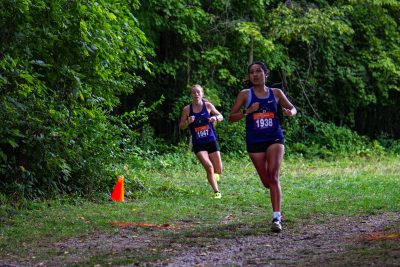