The bus ride home from Huntington on Nov. 6 was long and quiet. The whole cross country team was thinking about whether we still had a chance at qualifying for the NAIA national cross- country meet. The conference race we ran earlier that day did not go as well as we planned, but we worked hard to maintain a strong national standing throughout the season, so there was still a chance.

Over the next few days, we heard a series of conflicting messages on whether we would make it or not. Qualification for the national cross-country meet is determined by each conference’s top finishing team and then several at-large bids get voted in. There was nothing we could do but wait to find out what the national committee decided.

On Tuesday the 8th our coach, Rustin Nyce, said we were in. A typical reaction would be immediate excitement, but my guard was up after hearing the opposite news from a different contact.

I walked up to Rustin and looked him in the eyes to confirm, “This is not a joke? We are confirmed, for sure going to nationals and I can start packing my bag for Vancouver?”

At that point the excitement kicked in.

On the morning of Nov. 15 we gathered in the RFC to set off on our journey. Friends, professors, coaches and community members came to support us as we departed for the airport.

We landed in Portland then made a short drive across the river to Vancouver, WA. After we checked into the hotel, the guys set off on a shakeout run to get our legs loosened up after a day of travel.

The Pacific Northwest was phenomenal for running. The air was cool, but it felt warm compared to Goshen and the landscapes were beautiful.

The following morning we did our last workout before the race on Friday. It was a progressive run along the bank of the Columbia River. 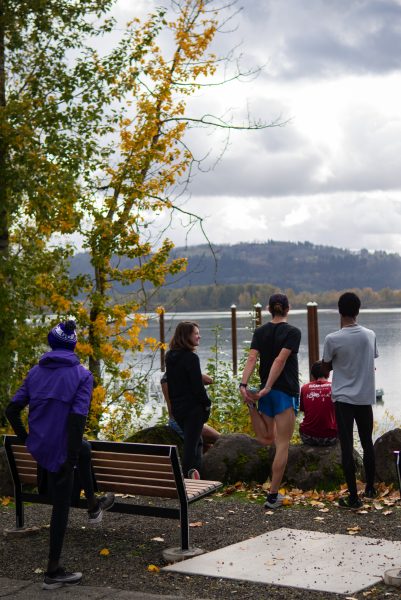 Warming up on the trail by the Columbia River.

We found pre-race fuel at the amazing restaurants around Portland and Vancouver. For pre-race motivation, we traveled down to Euguene, OR, the home of Pre’s Rock, a memorial site for the American running icon, Steve Prefontaine. For many runners, visiting Pre’s Rock is a kind of pilgrimage.

On the way home from Pre’s

Rock we saw the Michael Johnson Track at the Nike Headquarters in Beaverton. The track is recessed in the woods with trees growing inside the track too. The short 400 meters I jogged around it were some of the most surreal steps I have ever taken.

Finally, Friday morning came around and it was time to do what we came to do.

The course was a two kilometer loop that we would run four times. It was built into the side of a hill and the rain from the previous evening made for sloppy conditions.

We stepped up to a muddy line with 330 people lined up beside us and the gun went off. The first quarter-mile was a dash down the straightaway to get good placement. The frequent turns would make it challenging to pass others later in the race. 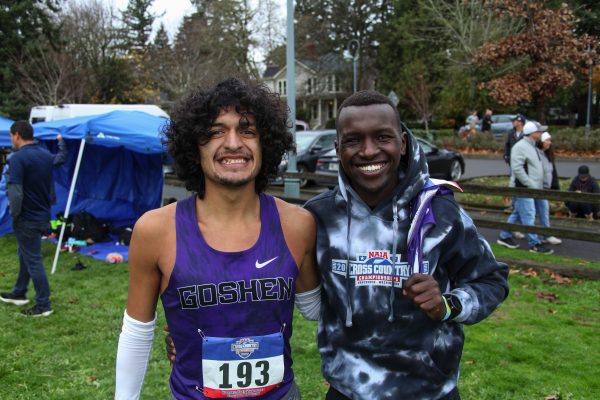 When I noticed people on the ground I made sure they weren’t my teammates as I steered around them (I learned my lesson last year when I joined the pileup by accident). As the race developed I was excited to find most of my teammates within a relatively close pack.

By the time the last lap came around my legs were burning. The course was even muddier now that the path had been beaten up by thousands of spikes. Our feet would slip a little bit with each step and the turns were particularly treacherous. Then we’d charge up a hill and turn again.

It was a change of pace from the flat, solid roads and trails of Northern Indiana.

At the top of the last hill the finish line made its way into sight. The collective energy of the group shifted; it was time to squeeze out one last kick for the season.

I don’t remember much from that stretch of the race. When you kick right your brain starts to shut down and your legs take over until you cross the line. Then a wave of relief and pain mixed together hits you as you try to catch your breath on the other side of the tape.

I was dealing with that wave while I looked for the rest of the Maple Leafs to see how their runs went. Nelson Kemboi finished as an All-American and the rest of us filled in with high enough placement to finish 24th overall. 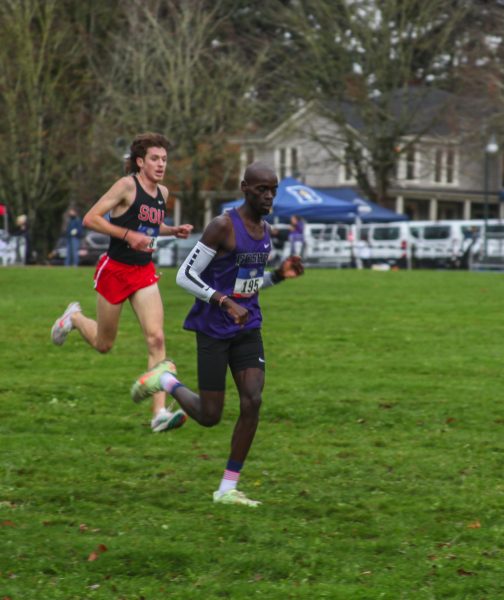 Nelson Kemboi on his way to his second XC All-American finish.

We finished our season in a higher place than we were seeded, with an experience that we won’t soon forget.