When Phil Mason, associate professor of business, received a Google calendar invite late one night in the fall of 2017 for a meeting the next day with Goshen College’s provost, the interim vice president of academic affairs, and the director of Human Resources, he had a hunch that he has going to lose his job.

Unfortunately for Mason, he was right.

In September, 15 faculty members, including Mason, learned their jobs were being reduced. (For the sake of their privacy, their names will be omitted.) The programs impacted include: business, communication, education, English, Bible and religion, and music. Departments impacted are: Advancement, the Center for Intercultural and International Education, Student Life, and Academic Administrative Support. No majors or minors were cut.

The cuts are formally called “full-time equivalent reductions” or FTE reductions. FTE units represent the amount of workload per employee in a way that makes it easily comparable in various contexts.

Four professors will not be returning in the fall of 2018, like Mason. Other professors have been reduced to 50 percent and will be continuing at Goshen college until 2020 when their positions will be eliminated.

Jo-Ann Brant, interim vice president of academic affairs and academic dean made sure to clarify that the GC employees were not fired or laid-off.

“Needless to say, it does mean that there are people who are not returning to teach in the fall of 2018,” Brant said.“Goshen College has been spending more than we’ve been earning, and so we had to get the budget back in balance so that the institution is in good fiscal shape. This is really critical for our accreditation.”

The budget challenges are due to a number of reasons. With rising expenses, drawing too much from the endowment, and trends taking too long to shift, changes had to be made.

Goshen is not alone in this struggle. Liberal arts colleges all across America are struggling to make ends meet. 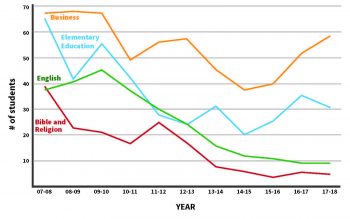 This graphic shows the student enrollment in a few of the departments being affected by the FTE reductions.[/caption]

According to an article published by the Washington Post in 2017, “about 40 percent of colleges enroll 1,000 or fewer students. Since 2010, those institutions have been shedding the most enrollment, a decline of 5 percent.” Due to this decline, many of these institutions have been giving out more scholarships and discounts to incoming students in hopes of reaching enrollment targets, but instead of earning cash, many colleges are losing out.

With 950 students, including traditional and nontraditional undergraduates, graduate students, and part-time students, Goshen College is smaller than most colleges. The decrease in enrollment throughout the years, not including these past two, contributed to Goshen’s struggle to keep their budget in balance.

But now, with increasing enrollment, GC is trying to play catch-up. Brant said that student patterns seem to be shifting significantly. Instead of enrolling in professional programs, students are pursuing pre-professional programs such as biology-chemistry, which is GC’s pre-med program.

Because of this shift, Goshen College needed to make sure that students have enough advisors — or that advisors don’t have too many advisees.

“At a small liberal arts college, the whole premise is that you’re known personally,” Brant said. “But when [a professor has] upwards of 30 to 40 advisees, that becomes very difficult.”

It was clear that Goshen College needed to make some changes.

Brant likened these changes to growing pains. Some programs needed to reduce staff to adjust to their shrinking number of students. Other programs, like those considered pre-professional, needed to add professors.

“In this shift that we’ve seen in enrollment patterns, there have been a real sharp decline in students enrolling in some majors, and some of those majors have been closely associated with what we think of as liberal arts,” Brant said. “It’s because of this reduction and lower enrollment of students in majors — there aren’t enough majors in those programs to sustain enrollment in upper-level classes.”

Brant said that while she is concerned about Goshen College’s shifting focus from the typical liberal arts major to science, technology, engineering and mathematics major, it’s more of a philosophical issue.

She said she feels there are a few majors and professors that GC has depended on greatly to keep their Anabaptist-Mennonite identity.

“You can never let that be the case,” she said. “You have to have identity diffused across multiple things because if identity is linked with one person and that person goes away, then you have a problem. It’s that problem of succession. You don’t want the health of a program to be so linked to a succession issue.... We need to find a way as programs evolve, and students’ interests evolve to make sure that we have enough places in the life of the community where we give attention to identity.”

Since the FTE reductions were made, the eight professor have been dealing with the news in a variety of ways. Some are leaving campus with no desire to work in higher education; others are content with their time at GC and are ready for the next chapter.

Mason said he was “completely surprised” when he found out he was one of the professors affected by the reductions.

Phil Mason, associate professor of business, has spent the past six months as a "zombie prof" — after May Term, he will no longer his position will be eliminated.[/caption]

“I figured the business department would not be one to be affected,” he said. “I’ve lived these past six months as a zombie prof.”

“Zombie prof,” coined by Mason, is a term he uses to describe himself and the other professors who have spent these past six months with the knowledge that they will no longer have a position at Goshen College come Fall 2018.

Mason said it’s a little difficult interacting with students with the knowledge that he won’t be returning next year, but he still teaches his class and tries to mold his students into business leaders “who know what they’re doing.”

While Mason has taught at GC for only five years, he’s dedicated a lot of time and energy into the institution — as a student, member of the alumni board, and parent of two GC students. Like many professors, he moved to Goshen with the intention of working for the college.

“The way this was done you can’t help but feel like the institution didn’t value that dedication a whole lot,” he said.

As a business professor, Mason understands the need for Goshen College to be fiscally sound. But he noted that he felt like the process wasn’t transparent enough. During previous FTE reductions, such as the one that happened in 2013-14, Mason said that a lot more faculty members were involved in the discussion, including himself.

“It was, in my view, a much more public process. It had input from departments, from faculty. People ask me about [the FTE] cuts and I say, ‘I have no idea, I wasn’t in the room, and I don’t think a lot of other people were either.’”

Ann Hostetler, professor of English, is one of the professors who has been cut to half-time until 2020, after which she will no longer have a position at GC.

Ann Hostetler, professor of English, will work half-time until 2020 when she will retire from Goshen College after 22 years of employment.[/caption]

“Some of the scholars and professors I respect the most, for their writing and teaching, are in the same boat. I feel like I am a member of an exclusive club — it just has a cost,” she said.

When beginning her position at GC, Hostetler tried to remember that her job as an English professor was just that — a job. But after 20 years, she sees it as a major part of her life, and even her home.

But while she loves the college, Hostetler has seen a big problem at Goshen College throughout her 20 years: professors are often expected to do too much for free or out of the goodness of their hearts.

“That’s not really sustainable over time,” Hostetler said. “I’m hoping our new dean, who has worked at a unionized institution, will realize that it’s not sustainable.”

Joe Liechty, professor of peace, justice and conflict studies, has spent a majority of his life on the Goshen College campus. His position will be cut in the spring of 2020.[/caption]

Joe Liechty, professor and director of the peace, justice and conflict studies program, has also spent a large portion of his life at Goshen College — he was raised on campus as his parents were resident directors and has taught at the college for over 15 years. He even joked that he “bleeds purple.”

In the months since Liechty found out about his eventual elimination, he’s done a lot of thinking, specifically about something Vic Koop, former professor of psychology, once said: “Never love an institution because it can’t love you back."

While Liechty can see the validity in the statement, he doesn’t agree.

“An institution can’t survive unless people love it,” Liechty said.

He also said that institutions love its employees back — maybe not in the way that employees would want all the time, but regardless, Liechty thinks love exists.

“The institution [Goshen College] loves me by giving me this floor to work on with these colleagues which has just been the most fun for 15 years,” he said. “[GC loves me by] giving me a job where I have a lot of freedom to shape my work as I think is appropriate and letting me think about things I really care about. I could go on.”

While Jo-Ann Brant, interim vice president of academic affairs and academic dean, played a large role in the FTE reduction decisions, she will also be leaving GC as a casualty of the cuts.[/caption]

Brant began her role as interim vice president of academic affairs and academic dean in April 2017. Within months of her new position, she was informed she would have to help choose who would be a part of the FTE reductions. Brant didn’t make the decisions alone, but she did play a large role in the process.

“I do think Goshen College can provide students with what they need,” she said.