It was a thrilling weekend for The Record as the weekly newspaper scored the Indiana Collegiate Press Association’s Division III “Newspaper of the Year” award for the second consecutive year. This was the third time in four years that The Record received this recognition.

The award, which is given to weekly college newspapers with a student population of less than 3,000, was given to The Record in response to the 34 awards received by staff, writers and photographers who participated in The Record last year.

The semesters included in this year’s ICPA contest were spring 2018, when 2018 graduate Emily Kaufmann was editor, and fall 2018 when senior Kristin Troyer was editor.

“We were especially pleased to see our contributions in print recognized during a year in which we redoubled our investment on digital platforms,” said Duane Stoltzfus, professor of communication and advisor to The Record. “The staff members are committed to excellence in storytelling, whether in print or online, in text or image.”

Some noteworthy awards include Abigail King, Nathan Pauls and Kristin Troyer’s first place win for best continuous reporting of a single story for coverage of President Rebecca Stoltzfus last spring, providing what the judge called “solid, consistent coverage of the new president and her mission to move the school community forward.”

Current executive editor Siana Emery took first place for a breaking news story about CoreCivic’s decision to terminate plans to build an ICE facility in Elkhart County. The judge noted, “The concerns of the local community are well explained, and the story offers a lucid portrait of the county leadership.”

Artistic choices were also celebrated, such as Dillon Hershey’s best feature photo award, for “painting a picture of hope” in covering the 40th anniversary of the Umble Center, as well as Juan Perez’s first place sports photo, for “capturing just the right angle and moment when a runner pulls from the pack” in cross country.

Third place awards included best review, given to Kory Stoneburner-Betts for a review of the Yamato drummers at Sauder Concert Hall.

Meanwhile, in nearby Carmel, Indiana, the Goshen College Globe Radio & TV student team when they won their fifth “Radio School of the Year” award this past Saturday.

This state championship title for the radio station joins the winners from 2012, 2013, 2014 and 2016. The five titles is the most by any school since the competition was first held in 2005. This honor accompanies 11 individual awards for Globe Radio, as well as seven awards received by the Globe TV’s student staff.

In a separate multimedia website competition, FiveCore Media, the college’s video production company, was honored with a second place award while The Globe earned third place in the same category.

Jason Samuels, general manager of Globe Radio and assistant professor of communications, said, “Few experiences are more gratifying than seeing our students rewarded for their excellent work. What’s more is the opportunity to enjoy the journey with them and then share in the success at the end.”

Among the Goshen College attendees were a number multiple award winners as a part of the student staff, including Riley Friesner, junior broadcasting major from Elkhart, Indiana, who won first place in three categories: Radio Air Personality, Radio Show and Radio Newscast as well as a third place selection in Photojournalism.

“In the past I was just another person on the team, this year I saw the hard work from the perspective as station manager,” said Hoover. “The significance of being named the best radio station in the state of Indiana is something that hasn’t hit me yet. It’s made me prouder than ever of The Globe and our staff.”

Sophomore Kadie Spoor was named an Indiana Broadcasters Foundation scholar, one of only ten students in the state.

More information about the winners and their awards can be found at goshen.edu/news 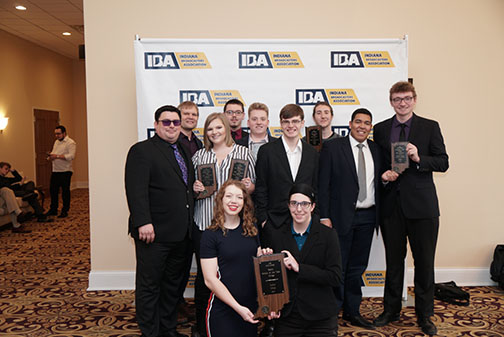 Representatives from Globe Media at the IBA awards reception