desserts during the annual Chocolate House event on Friday, Feb. 9., in Newomer 19.

Chocolate House is an event hosted by Goshen’s Student Women Association (GSWA). The coffeehouse-style event allows women and non-binary students to share their voices. Male students are welcomed to help provide chocolate desserts. Everyone is invited to come support their fellow women and non-binary peers.

share their voice for others to hear and bring campus together as we hear the stories and voices of the student performers,” said Kyra Krall, one of the current leaders of GSWA.

Genevieve Cowardin, another leader of GSWA, was thrilled by the turnout of a community

ready to support the performers.

“It takes courage to share as [the performers] did, and I felt so lucky to be able to be

“I think every performance was a highlight as it takes courage to get up there and share,”

said Krall. “I think it was really awesome this year that there were lots of original performances

and group pieces. We also had performers from all grade levels, which was great as well.”

The performances by first year students were especially exciting for Krall because she believes that they’re still finding their place on campus. Krall was encouraged that they felt comfortable enough to perform and share their talents at Chocolate House.

The event included a mixture of both serious and funny moments, offering a mix of musical numbers and poetry. Covers of Adele and the Wailin’ Jennies were performed alongside poetry discussing themes of sexual assault and defying stereotypes. Students performed both original work and pieces that other people had written.

The annual event has been hosted by GSWA since at least 2011, though both Cowardin and Krall were unsure of exactly how long the event has been happening.  Historically, this event was ticketed in order to raise money for non-profit organizations, but in more recent years Chocolate House has been free.

This year’s show was well attended, with people sitting in the aisles and standing at the back of the room. Despite the large attendance, the crowd remained quiet during performances, erupting into loud cheering when performers were done.

“I decided to perform this year because I’ve done it every year,” said Sessa. “I always love it so much.”

Sessa performed an original song, describing it as an “acapella song about allowing yourself to be led on and then it sucks when you are.” They were accompanied by three other singers-- senior Emily Stoltzfus, sophomore Olivia Clemens and first-year Em Kuntz.

Other highlights from the night include first-year Haley Kirkton’s performance of “Fabulous” from “High School Musical” and junior Rachel Klink’s reading of an original monologue about breaking down the stereotype of the “angry black woman.”

Moving forward, Cowardin is hopeful that the event will encourage growth in GSWA. “It is always a very popular event, and I think it can really help expand GSWA’s ability to reach more of our student population,” she said. 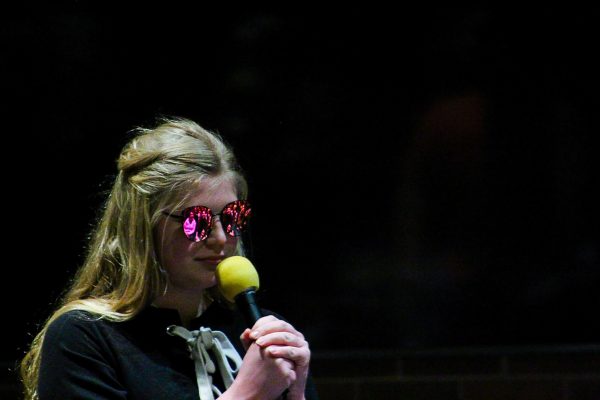