As the new director of the Institute for the Study of Global Anabaptism (ISGA) as well as the Mennonite Historical Library (MHL), Elizabeth Miller will get a chance to connect Anabaptists worldwide by helping tell their stories.

Miller, who graduated from Goshen College in 2006, is also starting teaching duties as assistant professor of history at GC. She assumed responsibility for these three positions in August, replacing John Roth, who retired as a professor in June after 37 years of teaching at the college.

Founded in 1906, the MHL collects published works relating to Mennonites and Anabaptists. Roth established the ISGA 11 years ago to “foster global research and publication,” Miller said, especially in ways that help Mennonites across the globe understand and nurture connections to the worldwide church.

Roth spoke highly of Miller, saying that she was an “exceptionally talented student and colleague” and has an “enormous array of gifts and experience, as well as a commitment to the church and its global expression.”

Miller said that she hopes that both the Mennonite Historical Library and the Institute for the Study of Global Anabaptism will “continue to be formative for the North American church, while also contributing to the emerging faces of global Anabaptism.”

Bringing together the North American and global contexts “through new research, sharing resources, and telling stories will be hopefully mutually transformative,” Miller said, “creating new understandings of what it means to be Anabaptist.”

As Miller steps into her new roles, part of her work as director will be determining how the MHL and ISGA can work together. Miller described how the MHL and ISGA “preserve and collect sources in different ways,” but they both work well together at “supporting storytelling around Anabaptist communities.”

The MHL has “particularly strong collections around North American and European Mennonites, Amish, and Hutterites,” she said, but there is less published work from other parts of the globe — which is where the ISGA comes in.

After graduating from GC with a major in history, Miller went to Anabaptist Mennonite Biblical Seminary for a master’s degree in theology and ethics. While there, she found out from a Colombian classmate about a “history and development promoter” position in Colombia, and she took the job. Miller spent four years in Colombia researching local Anabaptism, interviewing church elders about their oral history and teaching in seminaries and churches.

While researching in Colombia, Miller said that she “saw how important resources — published work — are to telling stories” and became “passionate about the access and preservation of resources leading to fruitful conversation.”

Miller and her family then came back to the U.S., and she took a position as the first administrative assistant at the ISGA, working closely with Roth on some of the program’s initial projects. While there, Miller helped author the groundbreaking “Global Anabaptist Profile” and served as the first editor of The Rhizome, the ISGA’s newsletter.

After four years with the ISGA, Miller returned to Colombia for a five-year term as program director of MCC’s Colombia and Ecuador programs, working directly with Anabaptist churches and institutions.

Joe Springer, curator of the MHL for the last 35 years, said that Miller’s life provides a “case study of what it takes to research global Anabaptism.” Springer also praised her prior experience with the ISGA and MHL: “She has a perspective of what ‘has been,’ which positions her well to imagine what ‘might be.’”

Roth, for his part, is also undergoing a transition, on a self-described “daunting” scale. As the project director of Menno Media’s “Anabaptism at 500” project, he is moving at “full speed” to bring six projects to fruition by the spring of 2025 — when church members will celebrate the 500th anniversary of the start of Anabaptism, often traced to adult baptisms carried out in Zurich, Switzerland, in 1525.

The projects include a photo book of Anabaptist global witness, a devotional book, curriculum materials, a collection of essays and an app of Menno Media products, but the primary focus of Roth’s work will be developing an Anabaptist Bible.

The Anabaptist Bible will be like a typical study Bible, Roth explained, with “introductions and essays that reflect an Anabaptist reading of Scripture,” but its distinctive feature will be 500 margin notes contributed by 500 Bible study groups “representing a diverse group of Anabaptist faith communities.”

The project will have been successful, Roth said, if it creates a “renewed interest in the potential of scripture to change our lives” and helps people of all faiths find ways to see the Bible as “a bridge, rather than barrier.” 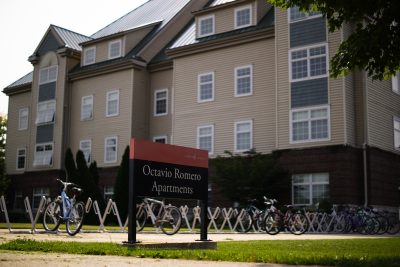