Recycling a can or milk jug here or there, using re-usable water bottles, and taking shorter showers are common habits at Goshen College, especially among those who consider themselves “green people.” But when it comes to the eco-friendliness of Goshen College’s investments, students and faculty alike are mostly in the dark.

Karina Kreider and Carina Zehr, seniors, along with Cecilia Lapp Stoltzfus, Noemi Salvador and Jacob Penner, first-years, are taking the lead on campus in hopes of shedding some light on the subject.

Divestment from fossil fuel companies is a relatively new topic being discussed on many college campuses across the U.S., including GC. GC's endowment makes up a little more than half of the entire Mennonite Education Agency's total endowment fund. Nearly every Mennonite institution (including high schools) is included in that large endowment fund, taking pride in their history of socially responsible investing. 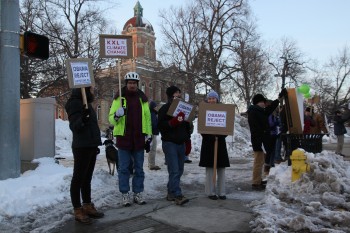 Last May, Goshen announced that it would get its energy supplied through 100 percent green energy through renewable sources.

“Divestment would be an additional way to continue having a consistent commitment to sustainability,” said Lapp Stoltzfus. “We’re still very much in an education phase in terms of educating students and then trying to gather a group that’s interested in furthering discussion on this.”

For Kreider, her desire to get involved began in the spring of 2013, when EcoPax hosted a viewing of 350.org’s movie “Do the Math”, as a campus and community event. It brought up discussion about colleges divesting and that is where Kreider first learned about the issue.

During the question and answer session following the movie, “somebody asked about what Goshen’s divested in,” said Kreider, “and it really surprised me to hear that we were invested in some of these fossil fuel companies.”

As a follow-up, Kreider started conversations with a few GC professors, which led her to gaining contact with students at EMU as well as people at 350.org, trying to gain a better understanding of what conversation would look like here on campus.

When Kreider returned this fall, she met Lapp Stoltzfus, who has significant experience with environmental protests and rallies in her hometown of Washington, D.C. The two of them, along with Salvador, traveled to Pittsburg, Pennsylvania, to attend a national environmental conference, Power Shift, over fall break.

“It was a group of mostly college students with a lot of seminars, workshops and group presentations,” said Lapp Stoltzfus. At this conference, climate justice and the environmental movement were discussed with some specific training on divestment and ways to address environmental concerns on college campuses.

“Our direct work since then has stemmed from what we learned there,” said Lapp Stoltzfus. 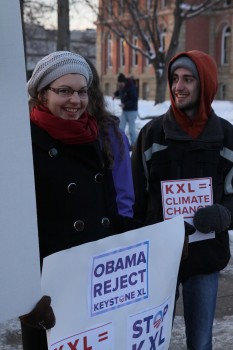 Kreider, who met with a few students from EMU at Power Shift, said they are “looking to work closely with students at EMU. They are starting the conversation again after kind of a lull.”

“We want to make it very clear that we as students still have a lot to learn about the concept of investing and the international divestment movement and so our goal is to bring awareness to the students and faculty of the various ways that we are involved in supporting fossil fuel companies,” said Lapp Stoltzfus.

Both Kreider and Lapp Stoltzfus hope to generate more conversation on this topic and would like to see more student collaboration on this issue.

Kreider also said she sees “this as holding the administration accountable to their own goals and to who we claim to be and what we claim to do, so it’s not anything radical.”

For more information on the fossil fuel divestment movement, visit www.gofossilfree.org and www.350.org.