Bridging the gap between students

Panera boxed lunches were piled high on Friday, Mar. 29 in the third floor connector as students gathered for student senate’s final Open Space of the semester. The focus of the discussion was working to improve the relationship between student-athletes and the rest of campus.

Senate collaborated with the Student Athlete Advisory Council (SAAC) to plan the event. Samantha Shank, in charge of publicity and marketing, said that the partnering between senate and SAAC “provided extra support and more insight into this conversation.”

The event was attended by non-athletes as well as representatives from many teams, including baseball, cross-country, softball, soccer, track and field, tennis and volleyball. All student senate members were present, along with Harold Watson, athletic director, who arrived with Emily Osborne, assistant athletic trainer and Samantha Emmart, coordinator of compliance and student services.

The event began with Shank welcoming and thanking everyone for their attendance. She explained the importance of the topic and that the zone was a safe space for people to voice their opinions. She made the group aware that because of different backgrounds, “people are coming from different perspectives.”

The attendees then broke up into smaller groups, each consisting of athletes, non-athletes and a leader from either SAAC or senate to facilitate and take notes on the discussion.

One group facilitator was Chelsea Foster, a leader of SAAC, member of the cross country and track and field teams as well as a Student Ministry Leader. Foster explained that bridging the gap between athletes and other students is a topic of great importance to her.

“I have had the privilege and opportunity to interact with both athletes and other students who are more involved in other parts of campus and I have had so many great experiences with both,” Foster said. “By bridging this divide, it is one very important step for Goshen becoming a better place for all of its students.”

After introductions, groups discussed how they perceived the connection between athletics and the rest of the Goshen College community. The majority agreed that there could be improvements and went on to discuss what these could be.

The next discussion point was how much support the group felt from their respective co-curriculars and what kind of support they wanted if they felt that they weren’t receiving enough.

Khampha Stemple, president of student senate, explained that the Open Space was a way to better understand how the students are relating to one another on campus.

“Goshen College is a place where people from a variety of backgrounds come together to not only gain academic and professional proficiency but to build diverse relationships with the people around us,” Stemple said. “This conversation was just one way we can continue improving the overall student experience.”

Leaders from both SAAC and senate were in agreement that the event was a success. The two groups will continue to work together by evaluating the main points that were brought up from the discussions and look for common patterns.

“After evaluating the information, we will be able to determine what action steps need to be set in place,” Stemple said. 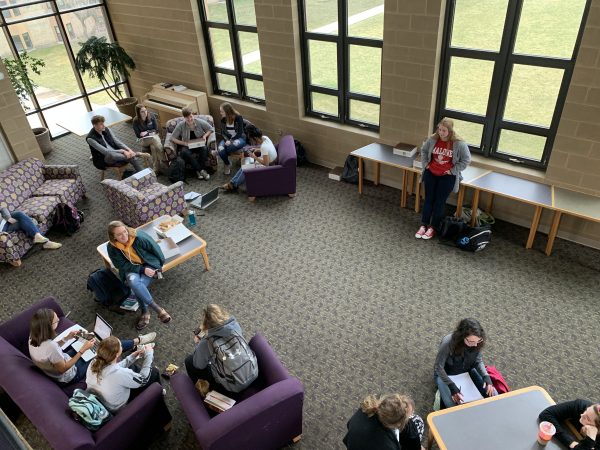