On Sunday, over 50 members of the Goshen College community crammed into the Prude House living room for the “Prude House Prison Symposium,” an event designed to educate and advocate for prison reform.

Packed tightly into every nook and cranny, munching on homemade cookies and chili, students listened to presentations on a variety of topics relating to prisons and pertinent to Goshen students. 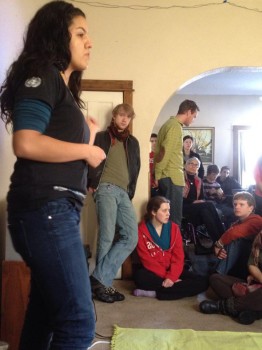 Andrea Moya, a senior, shared about the work being done by Goshen’s Social Reform Club and student volunteers in the local jail.

Martin Hofkamp, senior and primary initiator of the event, told the story of an incarcerated youth who is dealing with the reality that his life will be forever impacted by his prison environment.

Steve Nolt, professor of history, gave a history of the prison system, illustrating how the institution, intended initially as a humane alternative to violent means of punishment for crimes and an opportunity for intentional reform for criminals, has failed to achieve its goals.

For many in attendance, the most energizing part of the symposium was the announced opportunity to meet with incarcerated individuals in a new PJCS May Term developed by Carolyn Shrock-Shenk and the PJCS department.

Entitled “Justice in Our Lives,” the course will bring 10 to 15 GC students into the Elkhart County Correctional Center to engage in conversation and instruction with incarcerated students.

By launching this course, Goshen will join more than 120 colleges and universities who have been trained through the “Inside-Out Prison Exchange Program” which originated at Temple University and Graterford Prison in Pennsylvania in 1997.

The intention of the program is to merge two very different communities into one class to learn from each other and explore difficult, real life issues together. The course will combine the topics of criminal justice, restorative justice and transforming conflict and violence.

Ammon Allen-Doucot, a sophomore, said “the most exciting thing about Justice in Our Lives is the humanization aspect. On the whole in our society, incarcerated citizens are portrayed as subhuman, and this class is an opportunity to move from the abstract into the actual and to really learn from what these folks have to offer.”

According to Hofkamp, the organizers of the prison symposium attained their goal of spreading the word about opportunities to get involved with the jail. They continue to call for student volunteers interested in breaking down barriers between themselves, people of considerable privilege, and the incarcerated individuals who are often shrugged off by society as the hopeless “other.”

According to Hofkamp, “there have been quite a few people who have expressed interest in taking leadership after this year,” which is encouraging as many of the current leaders of the initiative will be graduating in the spring. For the program to continue and grow, underclassmen will need to carry the torch.

Students interested in the May Term class may contact Carolyn Shrock-Shenk for further information. Furthermore, donations of books of all varieties are being collected by the Social Reform Club to improve the library for incarcerated people who are eager to read.