“Chick-a-dee-dee-dee!”  The bird whistles from somewhere in the trees.  Down by his woodpile, Steve Shantz moves behind a sweet cloud of steam rising from his maple sugar “rocket burners.” 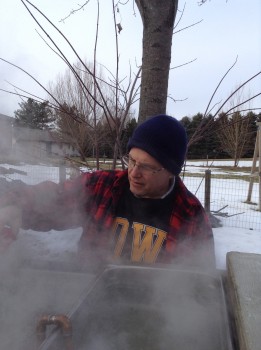 This is the second year Shantz, who works in the systems department at Goshen College’s Phys Plant, has made maple syrup on a large scale, collecting sap by the barrelful from sugar maples around town.  He upgraded his equipment this year with the rocket burners and a system of pans that siphon the condensing syrup as it cooks.

How did Shantz learn how to make something like this?

“I’m a nut,” Shantz said, “I was a chemistry major. Any time you do something new, you read about it on the internet, it sounds pretty good, and then you try it.”

He does lots of research, has just as many ideas of his own and is continually improving his variety of projects in and around his home, many of which relate to sustainability.

“My head has been this way since forever,” Shantz said. “Anymore, a lot of my ideas are related to sustainability – reducing my impact, making better use of the property.”

One of his earliest projects was a box kite; he has now expanded into everything from building a telescope with used mirrors to mowing less grass. This spring, he plans to put in a wildflower patch and plant apple, cherry and plum trees, as well as turn a pile of logs into mushroom logs.

Many of the trees already growing in his yard are ones he planted 21 years ago from nuts and seedlings.  What used to be fields is becoming a forest.

Shantz’s sustainability efforts aren’t only in his yard. His large pile of firewood, much of it coming from the Goshen College campus, is used to heat the Shantzs’ home.  Their hot water is heated by solar panels, also a Shantz project. He has a whole row of solar panels producing energy that he sells to NIBSCO. This was a project he did about six years ago, after he did the math and decided it would be stupid not to.

“Projects for me are like airplanes coming into an airport,” Shantz said.  Like anyone who starts lots of projects, his tend to stack up.  His interest is to integrate many of his projects sustainably with one another.

That’s where the ducks come in.

Shantz has a small pack of Anacona ducks, who are a hearty heritage breed, providing meat and what Shantz calls “the superstar eggs.” Once they start laying, the ducks pay for their own feed. The profit is even greater when he doesn’t have to buy feed. He lets the ducks eat the potato bugs from his garden. Last year he collected old Halloween pumpkins to eat; this year he hopes to fence his whole 3-acre property so the ducks can eat the bugs. 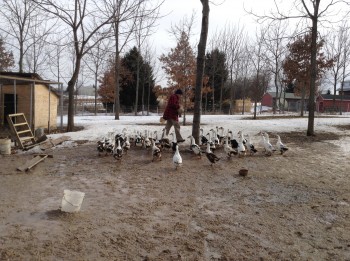 Steve Shantz is joined by his ducks as walks through his yard.

The ducks currently get grubs from the compost pile, which is full of the recyclables from the Michiana Mennonite Relief Sale last fall and hair donated by Shantz’s barber.  He turns it a few times and lets the geese forage there, and it “turns into ducks,” Shantz said.

Shantz said there are plenty of creatures that want to eat ducks, including dogs, coons, skunks, foxes and coyotes.  Small ducks could fall prey to a large hawk or great horned owl.  Last year, the crows would peck open the eggs – ducks lay their eggs wherever in the yard – and eat the yolks.

With a garden, brush piles, trees, bat house and room for purple martins, too, Shantz’s yard is perfect habitat for wildlife.  He’s become a birder because he gets to see birds that people don’t often see such as mockingbirds or thrashers in the grapevine.   He also gets rabbits and groundhogs in his garden.

For Shantz, managing his yard of wildlife is interesting.  “You have to think like a duck and think like a goose,” he said.

Shantz has ordered Cotton-patch geese to help him weed his garden.  Fowl also help his garden by eating the bugs and also provide him with manure; the floor of his duck coop is buried under a foot and a half of manure and sawdust.  He’ll clean it out in the fall and have plenty of manure to use for his garlic and onions.

Why does Shantz do all this?  According to Shantz, even at ten o’clock on a winter night, you’ve got to feed your ducks. He enjoys it; he doesn’t mind working by himself and finds that his sustainable projects provide great conversation when people want to help.

“It’s not for everybody, but if I read the tealeaves right, I don’t think we’re going to have a choice,” Shantz said of the sustainable lifestyle.  “How can you get other people to invest in it?”

He clarified that investing means “you put into it and get something out of it.”

To help others invest in his ideas, Shantz involves kids from his church in his garden.  He wants to sell his neighbors on sustainability and offers to help them plant trees.

“This is as evangelical as I get,” he said.