Lantz and Sessa to release chapbooks

For both students, the chapbook serves as their senior writing practicum.

Elsa Lantz, a senior double major in writing and TESOL (Teaching English to Speakers of Other Languages), has collected short stories and prose poetry that she has written while at Goshen College. This book has two sections: Fragments of Reality and Figments of the Imagination.

“I really like the idea of not knowing how much reality is in fiction and visa versa with nonfiction,” Lantz said. “So while my two sections might seem like they’ve divided my writing, the reader won’t really know how much is true and how much is made up.”

The title of Lantz’s book is “Uncommon Union,” which was inspired by a sweatshirt Lantz acquired while on SST in China.

The Pinchpenny Press editorial board publishes roughly five books a year, including the literary arts journal “Red Cents.” The process for Lantz to create a Pinchpenny book was “relatively easy.”

“I wrote a prospectus first, which is kind of like a pitch for my book,” Lantz said. “I included a part of the introduction and samples of the writing, as well as why Pinchpenny should publish the book and how I’d market it.”

Once the board accepted the prospectus, Lantz had to create a manuscript, while also working with junior Dillon Hershey, who helped with the layout and design of the book.

“There were a lot of details to consider, from what font to use to where I wanted to put the page numbers, but I loved getting to work through the process and learn about publishing,” Lantz said.

The release party is the last step in the process.

Lantz will be joined by Christi Sessa, a peace, justice and conflict studies major with minors in gender studies and writing.

Sessa’s book, “Perfect Enough to Bruise,” is a collection of poetry centered around themes of queerness, trauma and acceptance of self. Sophomore Amanda Guzman helped design the book and Sessa’s twin sister, Cassie Sessa, created art for the collection. 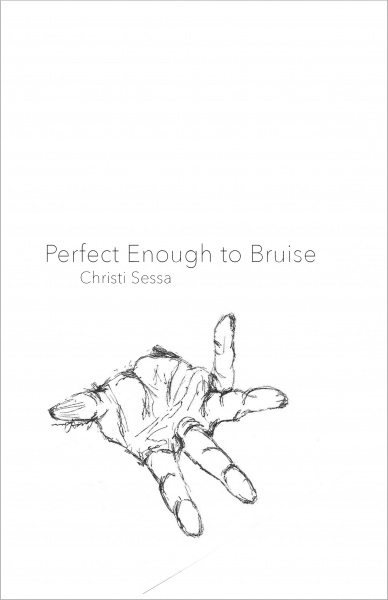 “I chose that topic because it’s what most of my poetry is about,” Sessa said. “For me, writing is a form of healing and processing.”

In their introduction to the chapbook, Sessa said, “I wanted to create a book that showed the beauty of what I have known, but a beauty that is also marked by hardship, just like life is. I wanted to create something that was as close to perfect as I could get. Perfect enough to bruise.”

The book release party is will be held Friday, Feb. 15 at 6 p.m. in Newcomer 19. The event is free and open to the public, and copies of each book will be for sale.