This Friday, Nov. 10 will be the opening night of the GC Theater Department’s fall mainstage show, “Crimes of the Heart” by Beth Henley.

The setting is 1974, Hazlehurst, Mississippi. Three sisters, Babe, Meg and Lenny Magrath, are reunited after the youngest is accused of attempted murder.

Though the plot centers on the consequences of the accusation, “[this play] is less about crimes and more about heart,” said director Doug Liechty Caskey, head of the GC Theater Department.

Each sister has to deal with her own set of hardships and must find a way to navigate complicated situations that arise in the wake of the incident. The plot thickens as the case becomes ever messier — one sister struggles with unfinished relationships from her past, and another tries to keep everything together even as she herself is on the verge of falling apart.

“The characters and their relationships with each other are really the focal points of the show,” said Abigail Greaser, a junior theater major who plays the role of Meg. “Beth Henley does a fantastic job of really capturing that special sibling relationship.”

“Crimes of the Heart” won the 1981 Pulitzer Prize for Drama and was nominated for a Tony Award. It has since been adapted into a film and a full-length novel. 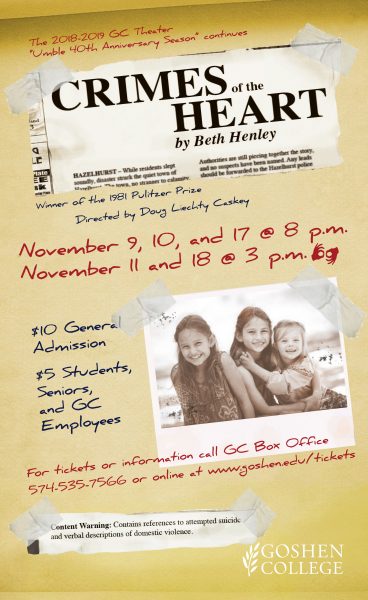 The entire story unfolds in one room: the kitchen of the Magrath house. People come in and out,  pace, drink coffee, smoke and sit at the dining room table to talk to each other. The single room setting helps to create a sense of intimacy with the audience, as they observe the goings-on and ups and downs of a family who has suffered a good deal more than most.

“I’m guessing your home also likely features a dining room table at the intersection of your living space . . . this is not only a realistic element of the play but a metaphorical one as well,” Caskey said. “The table is where the sisters meet, where guests are welcomed, or at least tolerated, where souls are bared, where decisions are made and where bonding is solidified.”

“Crimes of the Heart” is often described as a “tragicomedy.” It tells a serious story and covers some truly heavy subject matter, including suicide and domestic abuse. Nevertheless, it is peppered with comedic moments.

A review of the play in the New York Times said that “while this play overflows with infectious high spirits, it is also, unmistakably, the tale of a very troubled family. Such is Miss Henley’s prodigious talent that she can serve us pain as though it were a piece of cake.”

The show is part of the GC Umble Center’s 40th season celebration. All year, the GC Theater Department will be featuring the work of female playwrights and composers.