Emma Ruth, Anna Ruth and Lydia Yoder spent three hours this past Sunday in the art building, experimenting with a new style of 3-dimensional art.

Emma Ruth, a sophomore sociology major, was inspired by the work of artist Alexa Meade, who paints on the body in order to transform a 3-D plane into a 2-D perception. Interested in trying the project for herself, Emma Ruth asked her sister, senior English major Anna Ruth, and Yoder, a junior environmental science major, if they would paint her using this technique.

They began the process by painting a background for Emma to stand in front of.

Then, they turned off all the lights in the art building and set a spotlight on Emma so they could capture the shadows cast on her face. They painted every visible part of her body; even her lips, headband, earrings, hair and clothing were covered in acrylic paint.

“We tried to play with different colors,” said Anna, describing how the three artists attempted to avoid a style of realism.

The next step was to photograph Emma Ruth in front of the background they created. All the lights in the room were turned on again to create a full, even light. The best way to see how perception is altered is in a photograph, so that in the final product it appears as though the figure is part of an actual painting. 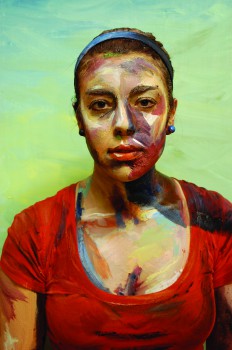