Last Sunday, Jacob Blake was shot seven times in the back by Kenosha, Wisconsin police officers as he attempted to enter an SUV. The event renewed the energy of many organized movements across the U.S. fighting for justice for Black men and women killed at the hands of police officers.

The death of George Floyd on May 25 initially ignited a lot of these activist groups this summer and the story was the same for 4US, a group of Goshen activists fighting for social change.

Goshen College graduate Abraham Medellin ‘19 started the group on June 10 as a Facebook page where people could share ideas, organize events and collaborate with each other on issues they were passionate about. Since then, alumni Aidan Friesen ‘19 and Rachael Klink ‘19 have joined forces with Medellin as part of the administrators of the group. 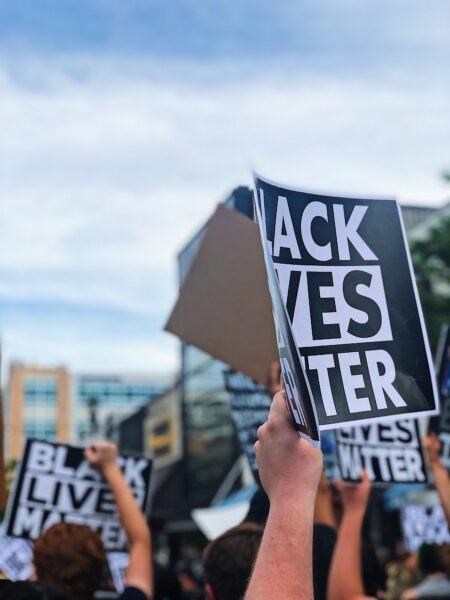 Signs are raided in protest during a July Black Lives Matter March in Goshen. [Photo by Priscilla Tanujaya]

The active mission statement on their page says, “4US is for the people, by the people, and focusing on the next generation. We are the voices that want to be heard and taken seriously. We are the ones with ideas that can really set off a spark into the minds of many, giving one another hope.”

4US initially gained a lot of traction in June surrounding a proposal made by Medellin for a Black Lives Matter street mural to be painted in downtown Goshen. Although their request for the mural was denied by the Goshen Board of Public Works and Safety, Medellin and the rest of 4US continued to speak out, organize and educate.

Medellin says he has received endless support and passion from students and other community members who are willing to protest and show up publicly, but he wants to capitalize on the movement in other ways as well.

Whether it be raising funds for back-to-school shopping, encouraging people to vote or helping to relieve homelessness in Goshen, the most important response, according to Medellin, is action. In August alone, 4US organized a free school supplies drive, a protest against Embassy Coffee and, most recently, a public gathering of support for the United States Postal Service.

With each event, 4US brings together many supporters in the community, but some events are greeted with backlash.

During the Embassy Coffee protest, 4US organizers were met with counter protesters supporting the Goshen business. The protest came in response to statements made by Embassy denouncing Black Lives Matter and not requiring their customers to wear masks in their place of business.

“Racism, homophobia and xenophobia divide a community,” Klink said. “So it was important to stand up and say, ‘That’s not welcome here.’”

After more attention was drawn to the situation, however, the group of advocates decided to refocus their energy to other local businesses in Goshen.

In a statement made on the 4US Facebook page on Aug. 18, Klink challenged the 586 members to email a Goshen business and ask them if they believe “Black lives matter, no human being is illegal on stolen land, science is real and love is love.”

This call to action is part of 4US’ strive to bridge the community in Goshen and to let minority groups know who supports them, Medellin said.

This is a core goal of the group’s advocacy.

“We’re opening a dialogue to affirm that there’s no hate in Goshen, and Goshen is a place where people should feel welcome,” Klink said.

Specific minority groups that 4US is looking to uplift and welcome include Black, Indigenous and people of color (BIPOC), the LGBTQ+ community and those with low socioeconomic status.

Medellin wants to keep the momentum going in Goshen and continue to be a resource for those who want to get involved.

“I’m not the only one that has these ideas,” Medellin said.

He wants anybody who is interested in making a change to get involved in whatever capacity it takes.

4US most recently posted an event on their page for a rally responding to the shooting of Jacob Blake. The gathering took place in South Bend on Wednesday and was hosted by Black Lives Matter.