The $1.4 million Center for Communication Studies, which includes studios for 91.1FM The Globe (WGCS), Globe TV and a newsroom for The Goshen College Record, was completed just in time for the start of the fall semester.

After being spread out across the campus for decades, with The Globe in the Union Building, the Globe TV studio in the Harold and Wilma Good Library and the newsroom in the Kulp Annex, the communication department’s co-curriculars will finally join forces under one roof. 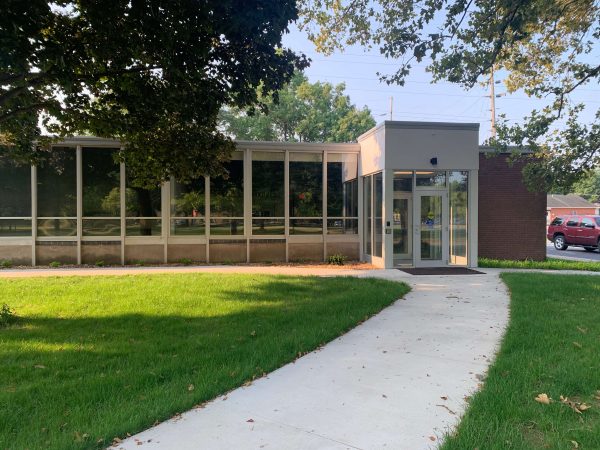 A newly paved sidewalk leads the way to the newly renovated Communication Wing in the Newcomer Center.

Located in the west wing of the Newcomer Center, this facility includes a TV studio with a set in the works, a newsroom with a collaborative “dogbone” desk, a trophy wall, an 86-inch video screen, a large conference table, a huddle room and stools overlooking the campus lawn.

Walking through the wing, a visitor will see the UPI teletype machine, which was moved from the top of the stairs outside the old WGCS station. It stands as a reminder of when the news came clicking and clacking one story at a time.

In the central hallway, the vertical lines in the purple and yellow carpet seemed to be without pattern. According to William Troyer, a broadcasting major and The Globe sports director, the lines represent the audio waves of general manager Jason Samuel saying, as if on air, “91.1 The Globe, WGCS Goshen.” 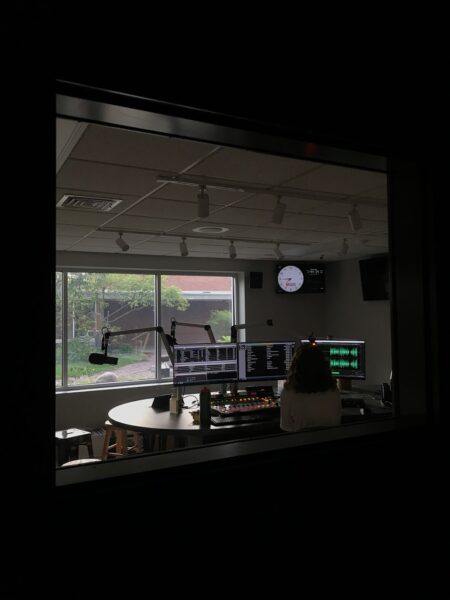 Samuel went live from the new facility for the first time on July 31 at 2 p.m. It only seemed right that he played Bob Dylan’s “The Times They Are A-Changin'” before going on air. He played that very song back in 2004 when the station changed its format from classical music to Americana.

The communication department is composed of a dedicated group of faculty and students, along with five co-curriculars: The Globe, The Record, The Correspondent, Goshen Commons and FiveCore Media.

“I am thrilled to see them in a new facility that is on par with their excellence,” said President Rebecca Stoltzfus.

Mackenzie Miller, executive editor of The Record this fall, is excited to be in the space.

“It is new, it is fresh, it is inviting,” she said. “The Hub was a place that will continue to hold many memories of late nights and impending deadlines, but this newsroom is bigger and will allow for more staff to be in the space at the same time, especially with enforced COVID-19 guidelines.”

and former director of facilities Glenn Gilbert all came to a consensus that this was a very successful project, completed on time and within budget, even in the midst of a pandemic.”

The communications department and Development Office are also creating plans to thank the donors whose gifts financed the Center for Communication Studies. Their names will be listed in a plaque installed by the lobby.

The renovation of the wing was made possible by a lead gift from Joe and Tami Zehr, from Fort Wayne, Indiana. Other transformational gifts came from Don and Jody Smith, of San Diego, California; Stuart and Shirley Showalter, of Harrisonburg, Virginia; and Dale and Kay Kempf, of Libertyville, Illinois.