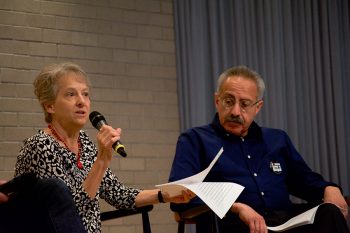 Goshen College students were in “the room where it happens” on Wednesday as the campus recognized Constitution Day with a Hamilton-themed convocation.

Hamilton: An American Musical, is a musical with music, lyrics and book by Lin-Manuel Miranda inspired by the biography Alexander Hamilton, by historian Ron Chernow. The show debuted in 2015 and has been gaining popularity and garnering praise, awards and fans ever since.

The convocation was facilitated by Jan Bender Shetler, professor of history, and organized by the History department as a whole, as part of a federal requirement that requires any institution that receives federal funding to recognize Constitution Day.

A faculty panel of presenters was made up of assistant professor of U.S. history and MQR book review editor Philipp Gollner, professor of music Debra Detwiler and Director of Corporate and Foundation Relations Richard Aguirre.

Shetler briefly introduced the topic and was followed by three students who performed a number from Hamilton. Juniors Josh Liechty and Lukas Thompson, along with senior Caleb Liechty, performed “Dear Theodosia,” a slower selection from the largely hip-hop and R&B inspired soundtrack.

A video of professor of PJCS Regina Shands Stoltzfus, who could not be present at the convocation, followed the performance. She introduced the musical to those less familiar and explained a bit about why she finds it so inspiring.

She also notes that the characterization of the cast of so-called American heroes is presented in a multi-dimensional way. “One of the most important things about [Hamilton] is that it acknowledges that human beings are complex,” said Stoltzfus. “Are they heroic? Not in all of their actions, but presenting these characters, particularly the main characters as complex people who love and hate and fight and make terrible decisions… the complexity of the human experience really comes through with that.”

Gollner continued in this vein, answering himself with a, “Duh!” after naming the fact that many people argue that Hamilton is not an accurate representation of history. He stated that it’s important to note that Hamilton cannot be expected to accurately represent an entire historical era.

Detwiler engaged with the musical themes at work in Hamilton. She offered examples of different phrases that repeat throughout the show to introduce different characters or events or signal a change in time or place.

She also offered a comparison between the opera The Marriage of Figaro and Hamilton: both stories represent a theme of a powerless person working their way up from the bottom, and both were extremely relevant to the current culture in their respective eras.

Aguirre wrapped up the presentation by offering an examination of the themes in Hamilton that relate to the Constitution and current political climate. “I think we can relate to these themes because we are seeing them play out every day in this country,” he said.

Hamilton was effective, he argues, because capturing Alexander Hamilton’s great ambition and his desire to speak out and argue on behalf of the working class is something that people in America today can still relate to.

Aguirre went on to talk about immigration policy changes enacted by the Trump administration within the last year and how they relate to the Constitution, which was written during Hamilton’s lifetime.