Tennis taken down by Marian 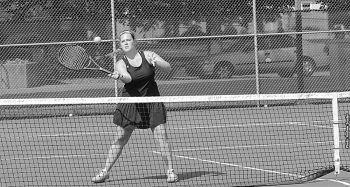 Both Goshen men’s and women’s tennis teams fell shy of Marian University this past Saturday at the Goshen College complex.

Juan Miguel Ciudad, sophomore, earned victories in both singles and doubles play for the men but the Goshen College men’s tennis team fell to Marian University 5-4.  The Knights have now beaten Goshen in every match since 2008, but Goshen this time came up two games shy of erasing that streak.

Goshen (5-3, 4-2 CL) started out on top 2-1 after doubles play with Ciudad and Kartikeya Sharma, a junior, winning 9-7 at no. 1 and Lukas Kanther and Luke Rush combining for an 8-5 victory at the no. 2 slot. The duo of Aritha Weerasinghe, a senior, and Byeong Min Lim, a first-year, at no. 3 fought to a 7-7 standstill before giving up a break of serve to lose 9-7.

Marian (4-1, 3-1 CL) leveled the match at 2-2 with Alex Wittenbaum winning in straight sets at no. 4 singles.  Evan Beck finished his day with a 6-2, 6-3 win at no. 6 singles.  Eric Zuercher, a junior, was facing Knight ace Nathan Bogle at no.1 singles but came up short 6-4, 6-2 to leave Marian a win shy of the team victory. Nicholas Marroquin of Marian edged out Kanther, winning the final three points after trailing 30-15 to Kanther. Ciudad won 6-4, 7-5 at no. 2, but it was too little, too late for the Maple Leafs.

Marroquin became Marian’s lone double winner of the day while Ciudad did the same on Goshen’s end.

The match marked the first time Goshen coach Evan Atkinson’s team failed to win the match after winning twice in doubles. GC’s loss dropped it into a tie with Taylor University for fifth place in the 10-team Crossroads League.

The women also fell in defeat to the visiting Knights in a 9-0 defeat. Elsie Koop Liechty, a first-year, was the only member of the five-member GC team to crack the scoring column with a game in the second set of her 6-0, 6-1 loss at no. 3 singles.

Following contests with the University of Saint Francis Tuesday evening, the men will look to continue their winning ways in an 11-team single elimination ITA tournament this coming weekend in Marion, Indiana while the women get back to the courts next Tuesday at Spring Arbor University. The first serve for the women is set to take place at 1 p.m.