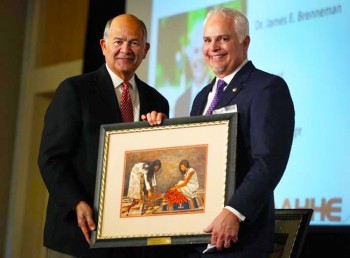 This award is presented to administrators who demonstrate excellence in their profession. It is named for de los Santos Jr., who worked as a leader, faculty member, mentor and champion in higher education. Brenneman was selected by a panel of experts in higher education.

The award was given by the American Association of Hispanics in Higher Education (AAHHE). AAHHE is a national, educational non-profit organization dedicated to improving the quality of higher education.

The award was presented at an awards luncheon at AAHHE’s 12th national conference in Irvine, California. The awards program was created to honor individuals at a special luncheon.

“I am deeply honored and grateful to receive this award,” said Brenneman. “I am especially gratified that it is named for the preeminent scholar, leader, role model, advocate and trailblazer for Hispanics in higher education, Dr. Alfredo de los Santos, Jr.”

Brenneman said that in his life he has unintentionally followed in de los Santos’ footsteps. He was in elementary school in Tampa’s Cuban quarter, Ybor City. de los Santos used to go to Ybor City as part of his work as dean of the Florida Keys Community College.

“I am very grateful to all my colleagues at Goshen College who have worked so passionately alongside me to help make our vision for a more intercultural campus come true,” said Brenneman. “This wonderful award is more precious to me than words can adequately express. I will cherish it for as long as I live.”

Brenneman was surprised to hear that he was receiving the award, both because of the size of GC and who had received the award before him the award wasn’t on his radar.

“What is so gratifying about having received this award, as I didn’t know I was even nominated, suggested that what we are doing here at Goshen College is on the national radar by the very people in higher education for whom our work matters the most,” said Brenneman.

Brenneman was once again surprised when he discovered that the award was not just a plaque but a painting by Edwardo Gonzalez called “The Stringing Ristras.”

The painting’s inscription says that it represents women working to ensure the poblano peppers are tight knit, ultimately ensuring a beautiful end result. Similarly, Brenneman’s work as president in organizing and assembling the right pieces has worked to influence a prosperous Hispanic student culture.

Brenneman feels that all the work he did leading up to being at GC – growing up in the Cuban quarter of Tampa, studying in Honduras and living in the Los Angeles area – prepared him for helping campus become more inclusively intercultural.

“I am excited about what the future has in store for me,” Brenneman said, “and can only imagine that whatever that future might entail, Hispanics in higher education will always be one of my great passions for the rest of my days.”