A heart made of Hershey 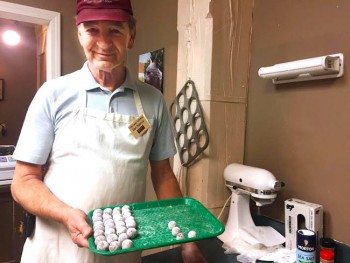 A burgundy sign hangs above the storefront display case. It says “Never Enough Chocolate” in black, curling font. In the window hangs a single strand of gold garland, a leftover decoration from the recent holiday season.

Dan Spence’s shop sits nestled in the corner of the second floor of The Old Bag Factory, a Goshen hub for local artisans and vendors.

The Chocolate Factory is only five years old, but Spence has had a rich history with the chocolate industry.

At the age of 2, Spence’s father died. His mother was grief-stricken and became unable to care for her young son, so Spence was placed in a Milton Hershey home in 1952. This foster system was founded by Milton Hershey in 1909 after discovering that he and his wife could not have children of their own.

The homes provided a place for orphaned and underprivileged children to live under the care of one live-in married couple.

In middle school, children were offered the opportunity to be apprentices in a specific trade. Taking after Hershey, Spence pursued chocolate and candy making.

Throughout high school, Spence developed his skills as a chocolate artisan. From a class of 140 students, only three chose the same trade. He learned the trade in the Hershey Estates Candy Kitchen, a small retail shop of about 10 workers. There he was an apprentice under an old German chocolate maker.

After graduation, Spence continued his studies in sweets.

“When I left school, John Hershey, Milton Hershey’s nephew, got me my first job in York, Pennsylvania–my hometown–making York Peppermint Patties,” says Spence. “That’s one of the few treats I have in this store that’s made somewhere else.”

Spence was hired as the production supervisor for the York company, spending four years there while simultaneously studying ministry at Lancaster Bible College. After college, he moved from Pennsylvania to Kentucky to begin his career in the church.

Soon he was running a small chocolate shop in Renfro Valley. In the Victorian-style village, his chocolate business brought in nearly $300,000 in sales. Each week between 25 and 30 busloads of tourists would swarm the local shops and Spence’s shop was a popular pit stop.

After the owner of Renfro Valley gave the property to the Music Hall of Fame organization, the town faced serious decline. In contrast to the six-figure sales profit that Spence was used to bringing in, his sales dropped to nearly a third of his regular annual profits.

Despite the income drought, Spence kept his shop open for a few years longer.

After several years, Spence grew tired and ready for retirement. He hung up his chocolate cap and took a vacation.

While touring around an old-fashioned building full of artisans, bakers and designers, he began chatting with James Rupright. Rupright owned the building, and before their conversation was over, Spence had agreed to open a chocolate shop there. And “there” just happened to be the Old Bag Factory in Goshen.

From European truffles to chocolate-covered Oreos, Spence can do, and does, it all. The shop is lined with Hershey’s memorabilia. He can explain the origin of each tin, each ceramic Hershey’s kiss and he will share a lesson on chocolate history with you any day.

“I named it after the Mayan Indians because they were one of the first civilizations to cultivate cocoa beans and spices,” Spence said, pointing to a small Mayan truffle. “They combined the two in a drink. It is horrible. It just looked like a black liquid. No sweetener–just potent and bitter.”

But the smooth Mayan truffle is sweet. Its dark chocolate, cream center is surrounded by a hard dark chocolate coating, dusted with cinnamon.

“To be honest with you, this is probably the worst business location I’ve ever been in, but supposedly being retired, I didn’t want to be real busy anyway,” said Spence.

The weekdays, anyway, are slow in the Bag Factory, he said, but Saturdays are always busy.

“Seems like everybody from Elkhart County, if they have company, they bring them here on Saturday,” he says.

For a retired man, he puts in his fair share of work. Throughout the week, you can find him in the shop from 9 a.m. to 5 p.m., but he will return to his shop in the evenings to make more batches of truffles, turtles, chocolate-covered blueberries and more.

“Instead of being retired, now I’m just tired,” Spence said. “But I love what I do.”

As he danced around the stool I was perched on, whipping up a batch of fresh Mayan truffles, he revealed the secret to his love affair with chocolate.

“Chocolate raised me, and I love the happiness it brings people,” said Spence. “You can’t be sad with a piece of chocolate melting in your mouth.”