The Hungry Hounds go to Haiti 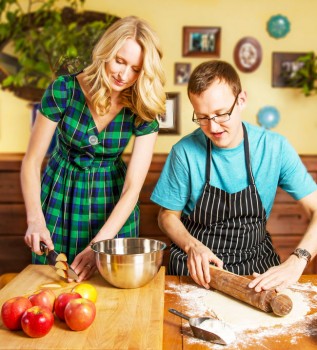 Rebecca Shetler Fast paused mid-sentence as 1-year-old Madeline toddled up to the table, humming with joy. “Hi!” Rebecca said, beaming at her daughter. And with a smile of recognition that she had been noticed, Madeline left the table to explore the spice shelf.

Shetler Fast and her husband, Paul, both 2008 grads of GC, publish a food blog called The Hungry Hounds (www.thehungryhounds.com), so it’s no wonder their daughter shows an interest in food.

You wouldn’t know it by the looks of the blog, but Rebecca and Paul are currently publishing the blog from two different countries. They are expecting another child, so Rebecca is avoiding the Zika virus by hunkering down in Goshen with Paul’s parents, Jan Bender Shetler, professor of history at GC and Peter Shetler, as well as 1-year-old Madeline until the third trimester of her pregnancy while Paul stays in Haiti to work.

The couple started the blog about three years ago while living in Pittsburgh. Rebecca said the blog was Paul’s idea.

And so she did, and they were hooked. What started out as a fun little way to share recipes with family and friends turned into a full-fledged food blog with 68,297 unique views from 175 different countries in the past year alone.

Cooking is something that the couple has found to be very important in their relationship. They have also found that cooking for people expedites the process of making friends in new places.

A little over a year ago, the couple moved to Haiti to start a five-year term as representatives for Mennonite Central Committee, and their ability to cook food has served them well.

“In every kind of new context or job, [food is] how we’ve made friends,” Rebecca said. “We are doing that in Haiti with all our staff and their families. So we feel like food is a genuine connection point there. Everyone eats.”

Although their cooking skills have proven helpful in connecting with people, keeping up the blog in a different country has come with its own set of challenges. Some major roadblocks for many recipes include the price of imported goods and inconsistent electricity.

The couple has a refrigerator, oven, stove and immersion blender, as well as some smaller appliances, but the temperamental electricity means that more planning goes into preparing recipes for the blog, each of which are tested as many as six times before the recipe is considered finalized and ready to post.

“If you think you want to purée something,” Rebecca said, “you have to think, ‘Okay, is there a time today when we might have power? Or do we have enough power to run even the handheld blender?’”

Even before they moved to Haiti, Rebecca and Paul spent a lot of time planning out blog posts. Rebecca prepares the blog posting schedule, sometimes as much as a year in advance, to make sure posts are seasonal to the North American palate, which can be tricky to manage in Haiti.

Since the blog is a two-person effort, Paul’s male perspective has led to higher-than-average male viewership compared with other food blogs. One of their most popular dishes was Paul’s Oven-Roasted Pork Ribs.

Rebecca laughs at the thought of it.

As people who love food, Rebecca and Paul hope that they can share their love of creating, or at least eating, food with their children. And they are starting them early.

“We’ve been working really hard with Madeline to introduce her to foods early and often and in a really wide and wacky range of foods,” says Rebecca.

They also hope they can instill in their children a sense of appreciation for food that surpasses any potential emotional struggles that food may bring.

“Sometimes North Americans and women have a harder time with food,” she said. “Our hope is that [Madeline] can find food she really enjoys.”

As Rebecca walked to the door, Madeline sat on the tiled kitchen floor opening bags of spices. If the smell of curry powder wafting across the hallway is any indication, Madeline seems to be doing just fine.