Focusing on student success: a Q&A with DaVonne Kramer 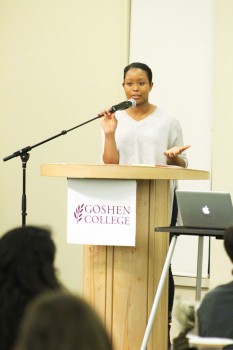 Goshen College campus ministries is offering an opportunity for faculty members to conduct projects that explore faith and vocation. DaVonne Kramer, coordinator of retention and intercultural student support, is leading a project that will focus on the experiences of African-American students and how they live out their faith on a predominately white, Mennonite institution.

What’s your position at Goshen College?

In terms of what department I’m involved with, I’m officially part of Student Life, and my title is Coordinator of Retention & Intercultural Student Support. My work is grounded in student success, so the way that I live out my work is through programming. So, I work with certain scholarship recipients and other groups: diverse students, first generation students, 21st Century Scholar students.

And is that more specifically with students of color, or for anyone?

My services are offered to everyone. I tend to work with more particular groups as well. Mostly because those are the students that are more likely to need it than other groups.

Is this type of project new to you, or have you done things like this before?

I haven’t done anything this specific. However, my project is a natural extension of my work as Black Student Union advisor. This is a group of students I work very closely with already. I know a lot of their experiences, so this is an opportunity to get more specific, to get things in writing and to get Goshen some good concrete data on the experiences of these students.

What made you come up with this idea, then?

Part of it was some work that was done last year with campus ministries. I worked with Bob Yoder to host a gathering of ministry leaders and worship assistants and to have them meet with the intercultural club–that being Black Student Union, Latino Student Union, International Student Club and Commuter Club. We wanted to talk about the experiences of those groups and the experiences campus ministries have to offer, and how we can make those better. It got me thinking about our climate for religious experiences for students of color, which can be complex. Also, a lot of our students of color aren’t Mennonite. Some are, but most aren’t. So in some ways it can be a double whammy when you’re a religious denomination minority as well as a racial minority.

What is the goal of your project?

Something we don’t really have is good data on black students. We don’t pull out the experiences of black students a lot; we’ll pull out groups or other demographics, but not really black students, so I wanted to address that. There isn’t a lot of religious representation. A lot of our black students come from a conservative background through different denominations, and that has been difficult for some of them. So I want to bring that gap forward as well.

What are some of the dynamics you see with the culture of Mennonite faith and these students who come from different denominations?

My observation of the Mennonite culture here is that it’s not as much about dogma or faith; it’s more about culture. Particularly because I’ve been able to get to know a lot of Mennonites of color who live around the U.S., and I’ve discovered that Mennonites as a whole isn’t represented at Goshen. So the culture of having family connections, last names and the hymn singing is hard for black students to integrate into. I still do think that some Mennonites here still see being Mennonite as a white thing. Even international students who are Mennonite come here and have been told that they aren’t Mennonite.

As someone who was raised Mennonite and black, sometimes it’s a struggle finding your identity and balancing it, both as a black person and a Mennonite.

Because the project overall is seeking to help us as an institution think about how we relate to other faiths through this interfaith theme. I think it suggests that it’s not an experience that some people have, but I would argue that black students live it out every day.

You mentioned some Christian professionals that the group would get to talk to. Who were some of those people?

Part of my focus on this project is allowing students to see themselves reflected in the professional field and recognizing that there isn’t a lot of representation of people of color in some fields. So I wanted to give the students the opportunity to see that there are people in the region in their field particularly. I know a good amount of professionals and would like to give them a chance to interact with them. So what the needs are of my students in the group will decide what people we’ll chat with.

What are some of the other discussions you’re hoping to have with this group?

I want students to be affirmed in their difficult experiences as a person of color and as a person of faith and the difficulty that experience is within Christian institutions. I went to a small Christian school, and my thought was, “This is a Christian school–I’m going to have a great experience!”, and it just wasn’t that. And I want to affirm that for students that it’s hard. And I want them to hear that it’s like that on the other side, too. It’s hard for us. Unfortunately, you don’t automatically get in [the job market] when you get a degree because you’re still going to be African-American and you’re still going to be in a very white world. So I want space to say that it’s hard and to hear from each other.