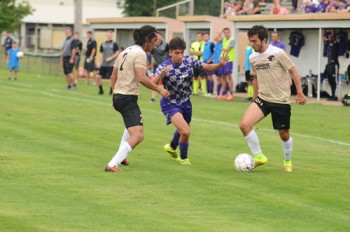 The Goshen College men’s soccer team hosted the Goshen College Classic last weekend at the John Ingold Athletic Complex, battling to a 1-1 draw against William Penn University on Friday night followed by a 0-0 stalemate versus Aquinas College on Saturday evening.

The first half of Friday’s game saw plenty of action on both ends of the field, but no goals to show for it. Each team recorded six shots and earned four corner kicks. Goshen headed into the halftime break with six fouls and two saves by Goshen goalkeeper Johan Escalente. William Penn had only four fouls and one save for Statesman goalie Emannuel Esparza.

The second half saw much of the same, but this time with different end results. In the 65th minute Statesmen Joey Messina finished home a cross from Renato Firmento for a 1-0 lead.

Eight minutes later Darius Rawlins, Goshen first year, beat the keeper to a thru ball from Calvin Mangunda, a senior, and flicked the ball into far-side net to knot the game at 1-1.

The final 17 minutes of regulation saw numerous opportunities for both teams, including a goal for William Penn that was called back due to the player being offside, and another Friday night Maple Leaf home game offered bonus soccer for all in attendance.

Overtime was a lot like the rest of the game, minus any goals. William Penn registered the only two shots of the first 10-minute stretch, whereas each team took two shots in the second overtime. Neither team scored and the game finished a 1-1 draw.

The Maple Leafs didn’t hesitate to play to their strengths against Aquinas College, putting and keeping the ball in the offensive half of the field. This consistent pressure landed all four corner kicks of the first half to Goshen, with three of those coming in succession in the fifth minute of play. While the chances were there, the Maple Leafs couldn’t knock any home.

A few minutes later Goshen had their best scoring opportunity of the first half when a ball down the right side found first-year Ollie Smith with space for a cross, which he slotted back near the penalty spot for incoming first-year teammate TJ White. White made contact with the ball, but with pressure on his ball, the shot rocketed up and over the crossbar. Goshen recorded seven shots in the first half while Aquinas had five.

The second 45 minutes saw the Maple Leafs turn up the heat even more, but still with the same end results. A key difference in the second half were fouls committed: Goshen gave up seven, while Aquinas was called for violations 16 times. Many of those fouls gave Goshen free kicks within 30 yards of the goalmouth, but a stiff Saint back line managed to clear away any Maple Leaf effort.

The first three games of the Classic saw overtime, and after a full 90 minutes of scoring opportunities and nothing to show for it, more overtime was added to the night. Both teams matched their shot totals from the first half in the second, while Goshen took a 9-0 corner kick edge into extra time.

Goshen’s offensive prowess was even more evident in overtime as they won the shot count 4-1 in the first 10-minute stretch and 2-1 in the second. Aquinas earned both of their corner kicks in overtime, while the Maple Leafs added three more for a game total of 12 corners. Despite a full 110 minutes of chances, neither team scored and the game finished a 0-0 draw.

Aquinas hit 12 shots throughout the game and finished with 24 fouls. Eleven Maple Leafs took shots with a total of 20 as a team. Sophomores Ethan Francois-Ravalier and Nate Nussbaum as well as White led the way with three shots apiece. Sophomore Johan Escalante ended with two saves in the shutout for the Maple Leafs.

Goshen (1-1-3) returns to action on Friday when they travel to Baldwin City, Kan. for a tournament and play host Baker University, with kickoff set for 3:30 p.m. Goshen time and radio coverage beginning at 3:15 p.m. on Goshen College’s radio station, WGCS 91.1 FM the Globe.