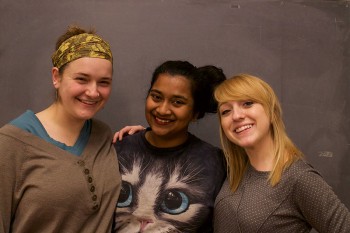 The Goshen Student Women’s Association, better known as GSWA, is a very involved group on campus. From Chocolate House to Goshen Monologues, this club works to promote women and non-binary people along with their stories and talents while providing a safe space for those people on campus.

Franks-North is a senior English and secondary education major. She has been involved in GSWA for three years, and has been leading GSWA since this last fall. She does a lot of the administrative work for GSWA.

According to Franks-North, this includes scheduling meetings and reserving venues and finding volunteers for GSWA events. As a leader, Franks-North places emphasis on making sure people can have a safe space on campus.

“I really want more people to find supportive groups on campus,” she said. “Whether that’s in a smaller group or in big, communal groups. I think everyone should have that safe space on campus, and if GSWA or a branch of GSWA can be that for someone, then I have done something right.”

Franks-North has worked at creating a club that provides that space, but she in turn has gotten the opportunity to better know and interact with women and non-binary people on campus in a different way.

“I have an excuse to talk to anyone and I do,” she said. “When I talk to them, it’s all about being supportive and finding how they are doing so as to increase support for each other around campus. GSWA is all about creating a supportive, inclusive, fun-loving group that allows women and non-binary students to be present together and feel as if they have a safe space on campus.”

Overall, Franks-North has loved her experience with GSWA. “Honestly, GSWA has been a place where I have finally found solid, healthy relationships with other women,” she said, “And I hope to pass that on.”

Another GSWA leader is Prashansa Dickson, a senior psychology major. She has been involved in GSWA since her sophomore year, and this is her first year as a GSWA leader.

Dickson explained that a lot of being a GSWA leader is planning events and setting up a budget. They do this with the help of Beth Martin Birky, professor in the English and women’s and gender studies departments, and GSWA’s club advisor. As the events get closer, the meetings among the leaders happen on a more regular basis, as in with events like Goshen Monologues or Chocolate House.

Dickson explained that they work as the reference people that others can go to within or outside of GSWA. So far, her favorite thing about being a GSWA leader has been collaborating with other clubs on campus to throw events. Her goal for the club is very much aligned with that of Franks-North and with each event they hope to increase student support and create more spaces for the sharing of important non-binary and women’s issues.

“I have learned how to accommodate various people and communicate with people in a more efficient way,” she said. “It’s important to learn how to work in a team when it comes to relationship and we, as a group, work well together.”

The last and most recent addition to the GSWA leadership team is Riley Mills, a sophomore communications major and marketing minor. She has been a member of GSWA since the beginning of the academic year, and this is her first semester as a GSWA leader.

For her, being a GSWA leader is about belonging and inclusion. “As leaders, it is our goal to help make sure that our members have everything they need,” Mills said. “We also try very hard to make sure that all women and non-binary students feel welcome and included in our activities.”

One goal the leadership trio has with planning is to be sure that members of GSWA have the freedom to be as involved as they wish, whether that is major involvement or minor involvement.

The belonging and inclusivity is what she loves about GSWA are what she hopes to take out of the experience of being a leader. “It is so much more than just a club,” Mills said. “I think that GSWA, for me, has created an overwhelming sense of belonging, and I hope the relationships I’ve built through my involvement with GSWA will be maintained throughout the rest of my life.”

“GSWA has made me more aware of what it is to think intentionally; to look at every angle and really strive to build an inclusive environment and a safe space for people,” Mills explained. “GSWA has its own legacy on Goshen College’s campus, and I really do feel honored to be a part of that.”

Right now, GSWA is finishing up plans for their final event of the year: Healthy Bodies Week, which will be taking place from April 3-9.

“We have events every day, and some days have multiple events,” said Franks-North. “This week is all about finding ways to understand your body holistically and give it a little lovin’. The group that’s pulling it together has worked so hard and brought so many wonderful ideas, and it’s just going to be an awesome week.”