When there’s a fork in the road, take it: Jim Routhier 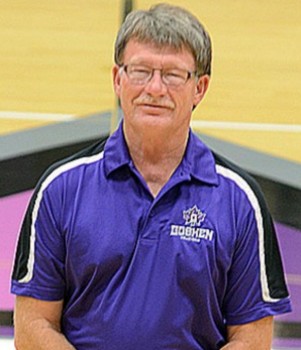 Jim Routhier has been coaching volleyball for 43 years, at Goshen for
seven years.
Photo by GoLeafs.net

I pushed the door to Jim “JR” Routhier’s office the rest of the way open. He was hard at work on his computer, finalizing the Goshen College volleyball team match schedule for the upcoming season.

I took a quick survey of his office full of preseason trip souvenirs. The five-foot flip flop from Jacksonville, Fla, still hung on the back wall of his office. The faint memory of JR wearing the flip-flop like a backpack during our shopping night by the beach still brings a smile to my face.

The 10-gallon hat from Denver, and a left cowboy boot from Helena, Mont., also hung right where I remembered seeing them last. Each souvenir contains signatures of players that traveled with him on the team preseason trip. My name appears on two of them.

“Hey, Coach!” I said while plopping down into the office chair to the left of his desk. It had been almost six months since I had been in this office. I took out a pen and notepad.

“Hey! Did you apply for that head coaching job yet?” he asked.

“Did you apply for that teaching job at Wawasee High School with it?”

“Actually, I sent all of the paperwork in this morning.”

“It would be so exciting for you to get that job,” he said.

This wasn’t our first conversation about my job search, or my future plans. JR and I have been discussing potential job opportunities around the Goshen area since the fall volleyball season. While I was still a part of the volleyball program this past season, an injury and student teaching prevented me from playing. JR gave me the opportunity to view college volleyball from the bench, more of a coaching standpoint.

JR and I couldn’t be more different. I was a senior in college applying for my first teaching job; JR is a retired teacher, after working for 35 years at Concord High School. I was looking to apply for a head coaching position; he has dedicated 43 years of his life coaching at the high school and collegiate level. Yet, in the four years I’ve known him as a volleyball coach at Goshen College, I’ve found myself learning a great deal about life.

While he’s known for compiling a 472-179 record at Concord High school and sending more than 50 of his former players on to play college ball at all levels, including Ohio State and Indiana University, Jim Routhier had never heard of volleyball until he was a sophomore in college.

Routhier attended Indiana University of Purdue-Fort Wayne (IPFW) to pursue an architectural and electrical engineering degree. Outside of his studies, Routhier earned a dual scholarship to play basketball and baseball. After two years as an IPFW Mastodon, he found himself more interested in the medical field of study than his engineering courses. He transferred to Ball State University, and it was there that volleyball first became a part of his life.

His first volleyball encounter happened on a whim. He was looking for something to fill in his course schedule that was devoted to science. He took a one-credit volleyball class with Don Shondell.

“Shondell was the guru of coaching volleyball at the time,” Routhier noted. “Ball State’s men’s program was the volleyball program in the Midwest.”

As a student-athlete largely unfamiliar with the sport of volleyball, Routhier established a good friendship with Shondell. “I didn’t do too badly in the class,” he said, chuckling. In fact, it was through the volleyball class that Shondell had asked Routhier to walk onto the men’s team and practice with them during the season. Just like that, Jim Routhier found a love for the sport of volleyball.

But volleyball wasn’t the only thing he discovered while going to school in Indianapolis.

“I met my wife down at Ball State,” JR said. “Did I ever tell you that story?”

“No,” I said, leaning forward in my chair. “I haven’t heard that story yet.”

After playing a football game in the commons area, Routhier found himself wearing a shirt with all of the buttons ripped off.  One of his female friends offered to sew the buttons back on the shirt for him. “While I was sitting with her in the commons, these three girls walk by. And we got talking. They were pretty nice kids.”

“When they left, I said to my friend, ‘Anita, can you get me that one’s phone number?’ and I pointed to the blonde-haired girl.” Routhier then returned to his dorm to make a phone call. They hit it off over the phone, and he decided to ask her to the free movie playing the following night. “I went to pick her up,” Routhier said, “and this brunette came up and started talking to me. Then I realized that this was the girl I was talking to! I thought I was talking to the blonde, who turned out to be her roommate.”

“I said ‘what the heck’ and went with it. We got engaged a few months later, and it wasn’t until after we got married that I told her that story,” he said, chuckling.

JR married his wife, Stephanie, his sophomore year. This year they will be celebrating 45th year together. And as he moved further into his medical studies, he became drawn toward other science-oriented careers: athletic training and science education.

However, making yet another major change was not an easy decision. “I didn’t want any doors to close,” he remarked, “I took the MCAT and got accepted into med school. I had opportunities, but I had been in college five years and I still didn’t know if I really wanted to go that route.”

Routhier decided with his remaining time left at Ball State to finish his education classes and student teach. His professor, Jim Dickerson, also kept pulling him toward the athletic training profession. Both of these careers allowed him to combine his interests in medicine and athletics.

Routhier student taught in Fort Wayne and New Haven, while his wife, Stephanie, got her first teaching job at Concord High School. He stayed with his parents, and commuted to Elkhart on the weekends. The Routhiers lived in two different cities for the entire year.  Jim was then hired as a science teacher and athletic trainer at Concord, which made their move to Elkhart permanent.

After a few years working at Concord, the previous head volleyball coach retired. The high school’s athletic director knew Routhier had been involved with volleyball at Ball State, so he approached him with a job offer.

“He came to me and asked ‘Hey, are you interested?’ And I said to myself, now wait a minute, I’m teaching class, I’m head athletic trainer, I have a family life, and now do I want to take on volleyball coaching?”

JR paused for a moment.

“I think I’ve told you this, Kayla,” he continued, “doors only open every so often.”

“My athletic director said ‘Hey, this is an opportunity, and we would like to see you take this. You’re here. You’ve got good background etc.’ So I went ahead and took it, with no head coaching experience or anything.”

“Realistically, Steph and I thought we would come up here [to Goshen] and stay four, maybe five years.” he said. The couple had previously thought they would eventually return to Indianapolis, where they went to college. “After four years, we looked at each other, took stock of everything. She loved her job. I was teaching anatomy, I was the athletic trainer and I was coaching. We said, ‘Why don’t we just stay here?’ And that was 30-something years ago.”

Routhier retired from Concord after 34 years of coaching only to take on another coaching job at Goshen College.

“One of the coaches in Concord’s conference had a daughter that played for the team, and she called me one day to say, ‘JR you’ve got to apply for this job.’ I said, “Why? I’m retiring in another year. I said that I was backing out of coaching.”

Routhier got a follow-up phone call from the same coach a few weeks later. Only then did he decide to look at the job description online. “I had one more year of teaching left before my retirement, so I was teaching at Concord and then coaching at Goshen for a year. It drove me nuts.”

“Trying to juggle everything was hard,” Routhier said. “That’s how I sort of fell into it.”

I glanced up from my notepad. “I’ve kind of found that that’s the way life works,” I said, chuckling. “You stumble into things as you go.”

“You know what, Kayla,” he said, “you will find this, and I guess this is some old age wisdom: it’s the little connections that you make. Who would’ve thought that the people I coached against would have a connection at Goshen and call me to say that I need to apply? You don’t realize how many things come back.”

“I’ve been noticing similar things with my job search,” I said.

“Look at why you came to Goshen,” he said. “You didn’t have a great volleyball experience in high school, but will that make you a better coach now? If you wouldn’t have come here, would you have gone to Wawasee to do your student teaching? Would we be sitting here having this conversation? So that’s why I say, Did I ever think I was going to coach college volleyball? Heavens no! I had no desire to. But that’s just the way the doors opened.”

After 35 years teaching and coaching, Routhier still finds that establishing relationships and interacting with people is the most enjoyable part of the job.

“I like to see kids advance and improve. I like this [gesturing back and forth from him to me sitting in his office]. Nothing will make me feel better than to see you down in Syracuse, teaching and coaching. No matter what the wins and losses are here, that’s the most important thing.”

“Kayla, you’ll find out in education; when I get emails from former students, those emails mean more to you than that paycheck you get.”

“I feel like that holds true for coaching as well,” I said. “I’m looking forward to emails and conversations like this in the future.”

“So,” JR said leaning back in his chair, “you came here for an interview, right?”