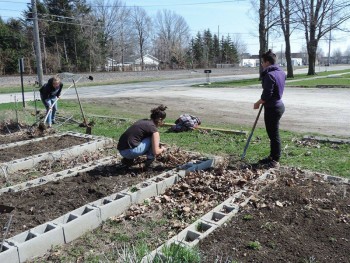 With spring officially here, EcoPAX is ready to capitalize on the warm weather with an array of events lined up for the final stretch of the semester.

All of the events in one form or another represent the goals of Goshen College’s ecologically-minded leaders by broadening community through ecological awareness, action, education and living by forming connections on campus and throughout the entire Goshen community.

Ben Wiebe, a sophomore and one of EcoPAX’s planning committee members, expressed his enthusiasm about the upcoming events when discussing some of the specifics. “It’s difficult to have a lot of interactive EcoPAX events throughout our winter,” he said. “We had a community leader potluck just recently, which had a great turnout.”

The EcoPAX community leader potluck invited some leaders and representatives from businesses around Goshen to discuss how they are implementing sustainable living practices and opened opportunities for people to become involved.

GC Divest has been one of the main topics of interest for the EcoPAX club for the past several months as well, with the recent publication of the GC/EMU joint letter addressed to the Mennonite Education Agency. “With the warm weather finally arriving, we are holding events that will really interest people campus wide,” Wiebe said.

The first event is this Saturday, April 2, which is a campus-wide art event with the intent on allowing people to express support for the GC divestment movement. Held at KMY, people will get the opportunity tie-dye or sketch the Divestment logo onto shirts and possibly vests. There will also be more planting and maintenance done at the Trackside Community Garden at the same time. Students interested in helping to maintain the student garden can find it half a block away on 9th street.

Dandelion Day at the Westlawn Dining Hall is also approaching. On April 22, Westlawn will have dandelions picked, cleaned and incorporated into the food. The date for picking the dandelions has not been set yet, but you can expect it to be soon when the plants begin to sprout. The day is to recognize a plant commonly regarded as a weed and to better appreciate the native landscaping we have on campus that promotes a healthier ecosystem in the Goshen area.

On Reading Day, students will have the chance to take a break from their studies to enjoy the outdoors in a bike and longboard relay race. Last year’s biking relay was so successful, EcoPAX decided to add another longboard category to spike more interest. Wiebe was sure to include the fact that there will be prizes for winners, including the category for “best dressed” relay team. The prizes for this year’s winners were kept a secret, however. For spectators, there will be ice cream on site while you cheer on your favorite team.

Mimi Salvador, a senior, is in the beginning stages of forming an eco-justice or EcoPAX party over the May Term semester. This party will raise awareness for environmental injustices that occur around the world that people may not often hear about. There are also several upcoming field days to work at the Trackside Community Garden, if people would like to continue working on the project or aren’t able to make it to the one this Saturday.

Cecilia Lapp Stoltzfus and Hannah Yoder, juniors, along with Salvador and Wiebe, hold open planning for EcoPax events such as the ones listed above. Often responsibilities are delegated to people who express interest in heading events, and anybody is welcome. Keep your eye on the Communicator for upcoming EcoPax meetings for your chance to be involved in planning and coordinating EcoPax events.