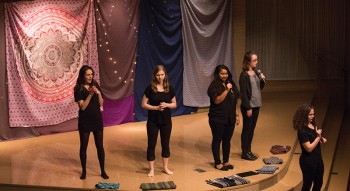 Goshen monologues tells the stories of women and non-binary people on campus.
Photo by Hannah Sauder

On Sunday March 20, the third annual Goshen Monologues presented a series of 44 true stories shared by female and non-binary students, staff and faculty.

Like last year, the Monologues were performed in the College Mennonite Church Sanctuary in anticipation of the crowd that they have generated throughout the previous two years.

The Monologues Committee strongly encourages women around the Goshen College campus to submit their stories anonymously via email, campus mail or an anonymous forum. After the cut-off date for submissions during the fall semester, these stories are then edited into a script and performed.

Dickson elaborated that in future years Goshen Monologues is hoping to extend writing workshops to Black Student Union (BSU), International Students Club (ISC), and Prism to increase the representation of all women and non-binary students around campus.

This year, a cast of 37 women and non-binary reciters, and 5 steering committee members shared 44 stories. Elizabeth Franks-North, a senior co-leader, said, “I think that 44 physical stories were written and recited, but in a much bigger way, every person who related to one of those stories had their story shared too. There is no number we can put on how many stories were shared because all of the stories are really a multitude of stories.”

According to Franks-North, the editing process consists of making these stories anonymous, organizing them into a script thematically, and editing for clarity. After Franks-North edited the stories, the entire leadership team read over the stories and suggested further edits.

The stories that were shared during the Monologues cover various stages and experiences throughout womanhood. Some stories celebrated what being a woman encompasses, while others revealed the darker realities that society inflicts on women. This year the stories fit into six different sections including: Who I Am, Discrimination, Family and Friends, Romantic Relationships, Assault/Harassment and Body.

Each year all of the stories are new. However, many of the student actors and audience members return each year to be a part of the Monologues. “We have new stories each year, which just goes to show how many stories are out there and how they keep becoming integral parts of people’s lives,” said Franks-North.

Some members of the cast had little prior experiences with acting, but the passion and energy they contributed in the process of creating the Monologues aided in the performance. Other than the many hours that the actors put into memorizing and practicing their parts, they had to focus on honoring another woman’s story and also being responsible for expressing her words.

“I think more than anything, the most effort comes from asking the cast to be vulnerable and take a story into their heart. They sit and live with these stories in many ways, and that effort cannot be understated,” said Franks-North.

Through all of the hard work and emotions, giving these stories a voice is the main motivation of the Goshen Monologues.