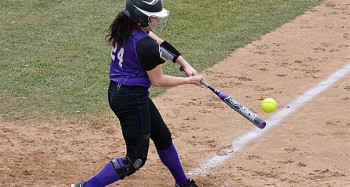 Miranda Robles, junior, at the plate for Goshen softball.
Photo by GoLeafs.net

Goshen’s softball team opened conference play on Tuesday on the road against the Pilots of Bethel College, winning one of two games.

The Maple Leafs jumped out to an early lead in game one, with a pair of runs being scored in the top of the first inning. The lead wouldn’t last long however, as Bethel would score all seven of their runs in the bottom of the third, more than enough to secure the win for the Pilots. Goshen would show life with another run in the fifth inning but the Pilots held on the take the opening game 7-3.

Brooke Maes, sophomore, and Melissa Munoz, junior, collected an RBI (run batted in) apiece for Goshen, with Sam Langley, senior, Miranda Robles, junior, and Maes all scoring a run in the loss.

The second game would see Goshen flip the script and pour on runs late to secure the win and a split of the doubleheader. Bethel scored the game’s opening run on a solo home run in the second inning before Goshen responded with two runs in the fourth to take a 2-1 lead, a lead they wouldn’t relinquish. The Maple Leafs extended their lead with three runs in the sixth and an insurance run in the seventh to hang on for the win despite a sixth inning push by Bethel, which saw the Pilots come within two runs of Goshen.

The Leafs were led offensively by Maes and McKinzi Vega, first-year, who each had three RBIs. Vega contributed a three-run home run in the sixth inning to extend Goshen’s lead to 5-2 and Maes had a team-high two runs scored. Rae Ann Miller, first-year, was on the mound for Goshen, allowing only two earned runs on three hits while striking out six Pilots over seven innings of work.

The win places Goshen’s record at 3-13 (1-1 conference) on the year. The Maple Leafs are in action again on Saturday when they will host the visiting Cougars of Mount Vernon Nazarene University for their home opener. First pitch of game one is scheduled for 1:00 p.m.