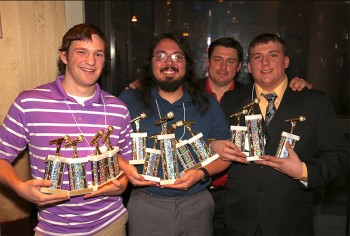 91.1 The Globe won several awards at the IBS awards.
Photo contributed by Comm-Mar

Out of 6,000 entries from across the nation, one school getting twelve finalist nominations out of the 115 colleges represented at the IBS convention is, at the very least, “atypical.” Because of the size and level of student involvement with WGCS The Globe, the ability of Goshen to compete with larger schools is incredible and something for Goshen to be proud of.

The station as a whole won first place for “Best Use of Social Media” and received a finalist nomination for “Best College Station in the Nation,” continuing their six-year streak of being nominated as finalists. University of Tennessee at Martin won the award for Best College Station in the Nation this year, but Goshen’s WGCS has won it twice in the past five years (2011, 2013), establishing itself as the only station to win the award twice.

When “even being nominated is like winning,” an ability to be recognized in multiple categories for many years is a statement of, in the words of Jason Samuel, “the caliber of students at Goshen College.”

Colin is the first, first-year student to win a singular finalist nomination, which is a huge achievement and honor.

Jason Samuels, Colin’s father, said, “there were 115 faculty advisors that night, each very proud of their own students, but there was no prouder father in New York City”.

From his experience forming and refining over the past ten years, no one knows better than Jason Samuels that refining isn’t over after the awards are released. “Creating a culture of excellence is a journey,” he says. Emphasizing that success consists of hard work, good leadership, accountability, experiential learning, and “the little things.” Samuels said, “In the end, it is the little things that make a difference.”

Andrew Snyder, a junior broadcasting major from Goshen, nominated for “Best Sports Play-By-Play,” said that among the many differences between The Globe and other schools is the “community around the station.” Along with the community, the opportunities to improve through experience, and the leadership at The Globe are also important distinctions.

One of the leaders specifically mentioned was Victor Garcia, a senior communication major from Goshen. He was nominated for “Best Station Student Manager,” an important and prestigious acknowledgement.

Victor Garcia’s leadership at the station was a living example that, according to Samuels, “no one works harder than Goshen College students.”

“I’m proud of our students and the program they’ve built. Within the framework of a very supportive communication department and faculty leadership, they’ve been given the tools for success. They continue to pursue excellence and through that are rewarded by their peers for their achievements,” says Samuels.

Stay tuned for the State level awards for WGCS that will be published next week.