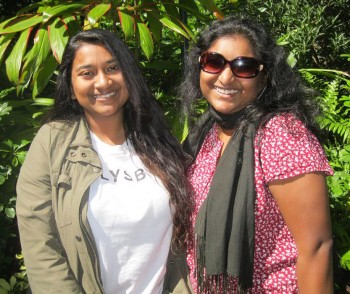 With her lilting, stunning voice, Prashansa Dickson captivated all of Sauder hall on Saturday as she sang a love song from India, her home country. As an international student, Dickson made a transition from Woodstock School in Mussoorie, India to Goshen College that gives her a unique perspective regarding the international community abroad and at Goshen.

“I have been singing since I could talk,” Dickson said. “My mother’s side of the family is full of composers and musicians. A lot of music they have written has imbedded itself into the Christian vernacular of prayer meetings across India and some of south Asia. Singing has always been something for me, personally, more than for a performance or spectacle. I would still rather belt songs in the comfort of my home than on a stage, but that discomfort is slowly going away.”

Any discomfort was not apparent to those watching on Saturday, with Dickson and Sohail Das interweaving their voices to create a song of adoration and love so obvious that you did not need to know the words to understand. With talent that is apparent in many aspects of Dickson’s involvement on campus, it’s apt to wonder just how she came to this small northern Indiana campus.

Out of 12 possibilities for collegiate studies, Dickson decided on Goshen even though it’s a world away from the picturesque mountains surrounding Woodstock School. Dickson’s unique major request was a deciding factor in what school she chose.

“I wanted to major in Forensic Psychology, a very specific undergrad major that less than 10 schools in the US offer at an undergraduate level,” Dickson said. “I ended up choosing Goshen because their financial aid and scholarship plan worked the best with my needs. They were willing to create an individualized comprehensive plan for me and this allowed me to attend here.”

The exposure to Goshen College came from the long-existing relationship with the Woodstock School, where many alumni and faculty exchange periods of time at one or the other. In working out a plan with Goshen, Dickson was determined to pursue her interests, a decidedness oft coveted by entering first years.

As a fourth year psychology major, Dickson has had the time and the skill set to analyze her surroundings and people at Goshen. Moving away from home and culture can be a jarring experience, and Dickson has found physical and cultural differences that have added to her experience.

“I think the most noticeable difference I felt when I first got to campus were the colors,” Dickson said. “It was autumn here, and I, having gone to school in the mountains, had only ever seen evergreen trees. There were some deciduous trees, but nothing like the very clear autumn season here. I remember being very into the colors of the leaves; I found myself collecting some every time I would walk home.”

That beautiful aspect of Goshen is a celebrated one, but Dickson also noticed an underside to the beauty that differs from her home experience.

“I think what I like least about the US is the very strict masculinity I’ve seen,” Dickson said.  “I come from a very collectivist culture in India and Woodstock School specifically – we all grew up together and found family in each other. The boys I grew up with weren’t afraid of hugging each other or expressing love and compassion toward one another. While I’ve seen the men at GC be better at having a more fluid masculinity than the larger US, there is still a jarring difference in the way that masculinity is portrayed here than where I grew up.”

Dickson’s background allowed her to name and process this difference, with articulation that probably stems from her studies in psychology, as well as being able to discuss these issues with her immediate peers.

“My favorite memory from my time at Goshen was when I made my first friend here,” Dickson explains. “We had a typical freshman night where they insisted I experience the American cultural joy – Taco Bell – and then we stayed up until 4:00 am talking about religion, philosophy and our life stories in the semi-cold temperature outside in weather-inappropriate attire. Nights like this one helped me feel at home.”

Coming from a powerful, dynamic community, Dickson was able to bring some of that to Goshen but has also encountered some of her own culture among Goshenites.

“I would not have expected old rich white people whom I encountered in the US to have such intricate knowledge of how to make dhal or tie a sari, both of which I have seen since being here,” Dickson said. “The Mennonite community has been a comforting environment for me, especially for my first time being in the US.”

While Dickson has been working during her time at Goshen to bring forth more integration of traditional and international students, it has not always been easy for her to relate to both aspects of her experience.

“I never really tapped into the ISC club until my sophomore year,” Dickson said. “It seemed like this closed group that I didn’t really belong too. The friends I made immediately were friends from my ICC class who were mostly white Mennonites. It wasn’t until the Coffeehouse that I tapped into the ISC culture and then when I became a leader, I began to integrate into it more. It felt strange that I, as an international, didn’t feel like I could automatically assimilate into the ISC.”

Dickson’s community in India contributed to that feeling, but it was Dickson’s personal mission that really let her integrate herself with the larger Goshen community as soon as she got on campus. But as her time at Goshen comes to a close, she finds that she has struck a balance that works for her.

“I grew in a very international school community and am used to making friends with a lot of people who are very different to me and that position of discomfort was something I wanted to challenge myself with when I came away to college,” Dickson said. “Since having been here though, the international community has been a great support for me and I like that I can tap into whenever I feel homesick.”